[In the year 6983 (1475) …In the same year that the records of Afanasii, merchant of Tver1, were obtained, he had been in India for four years2, and wrote that he had set out on his journey with Vassily Papin. I asked when Vassily Papin had been dispatched with the gyrfalcons of the Grand Duke, and was told: the year before the march on Kazan, he returned from the Horde, and perished near Kazan, shot by an arrow, when Duke Yuri marched on Kazan3. But I did not find in the records any mention of when Afanasii set out or in which year he returned from India and died. It is said he perished before he reached Smolensk4. His records he had written in his own hand, and merchants brought his notebooks to Moscow, to Vassily Mamyrev5, secretary to the Grand Duke.]

With the prayers of our holy fathers, O Lord Jesus Christ, Son of God, have mercy on me, your sinful slave Afanasii, son of Nikita6.
I, sinner that I am, have written here of my voyage across three seas: the first, the Sea of Derbent, or the dariya of Khwalis7; the second, the Indian Sea, or the dariya of Hindustan8; the third, the Black Sea, or the dariya of Istambul9.
I departed from the golden-domed Cathedral of our Saviour10, having taken leave of Mikhail Borisovich11, Grand Duke of Tver, and their Graces, Gennady of Tver12 and Boris Zakharyich13.
I travelled down the Volga, and arrived at Kalyazin, at the Monastery of the Holy Trinity and the Martyrs Boris and Gleb14, and obtained blessings from the Father Superior Makarii and the holy brothers there. From Kalyazin, I sailed to Uglich, and from Uglich15, I was allowed to depart unhindered. I then arrived at Kostroma, and, bearing a passport from the Grand Duke, called on Prince Alexander16, who allowed me to leave. Untroubled, I reached Ples.
I called on Mikhail Kiselev, Governor of Nizhny Novgorod17, and Ivan Saraev, the Keeper of the Tolls, and they too allowed me to leave without hindrance. Vassily Papin had already moved on, and I waited two weeks18 in Novgorod for Hassan-Beg, the Tatar ambassador of Shirvan19. He was travelling with gyrfalcons from the Grand Duke Ivan, and he had ninety gyrfalcons with him.
I sailed with Hassan-Beg down the Volga, passing Kazan with no trouble, not having encountered anyone, and passed the Horde, Uslan, Sarai and Berekazan, and entered the river Buzan. Here we met three pagan Tatars, who falsely informed us that the Sultan Kassim20 lay in wait for merchants with three thousand soldiers on the Buzan. Hassan-Beg, the ambassador of the Shah of Shirvan, presented each of them with a caftan and a fine cloth that they might lead us safely by Astrakhan. They, pagan Tatars, took the caftans, but betrayed us to the Khan. And my companions and I left our boat and boarded the ambassador’s.
We sailed past Astrakhan in the full moon, and the Khan saw us, and the Tatars shouted Do not run!, but we ignored them and fled in full sail. For our sins, the King sent all his men after us. They caught up with us at Bogun and shot arrows at us, killing one of our men, and we, in turn, killed two Tatars. At a weir20, our small vessel was trapped, and the Tatars seized it and plundered it; all my belongings were on that boat.
We reached the sea on the big vessel, but foundered on the mouths of the Volga. Then the Tatars captured us and ordered us to tow the boat back up the river to the weir. They confiscated the big ship and took four Russians captive, and they allowed us to leave, dispossessed, beyond the sea, and did not permit us back up the river, for fear we might send word. 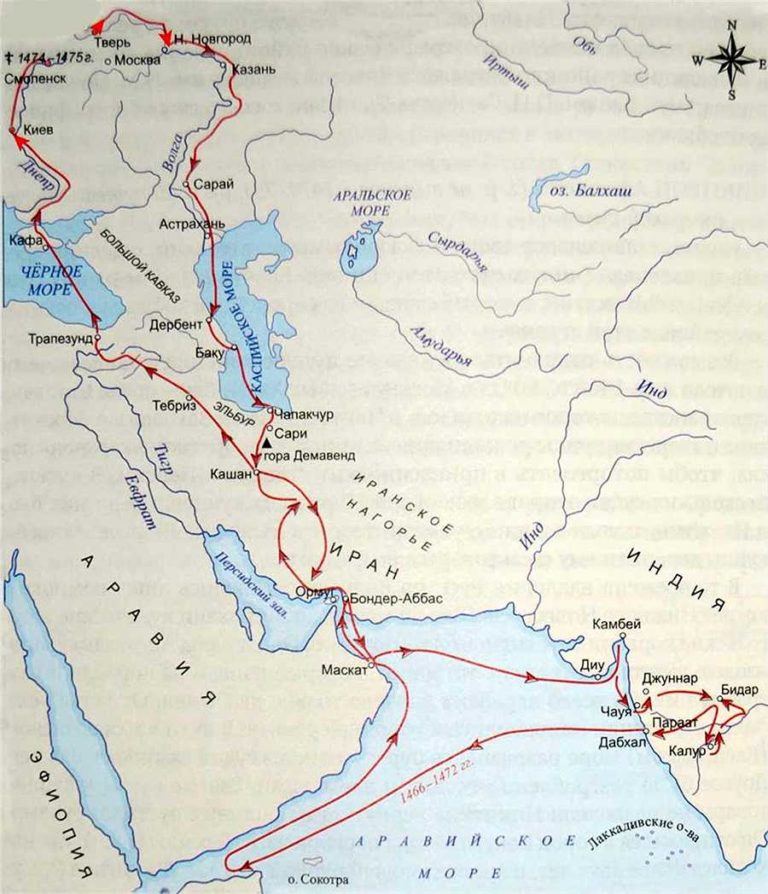