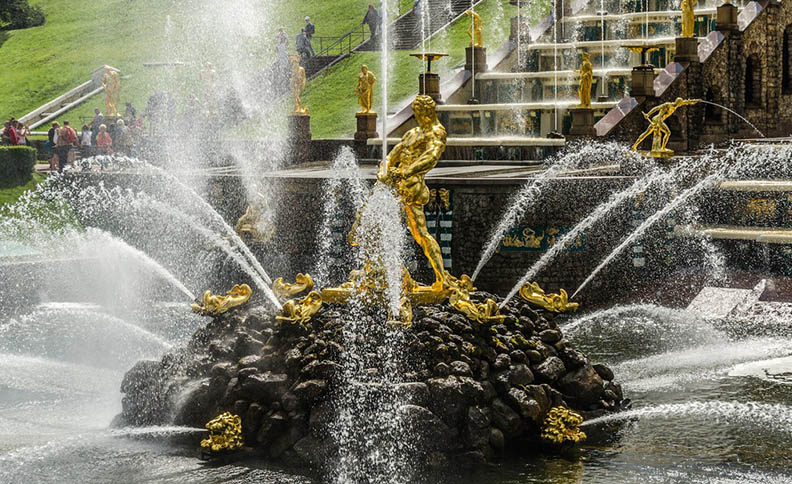 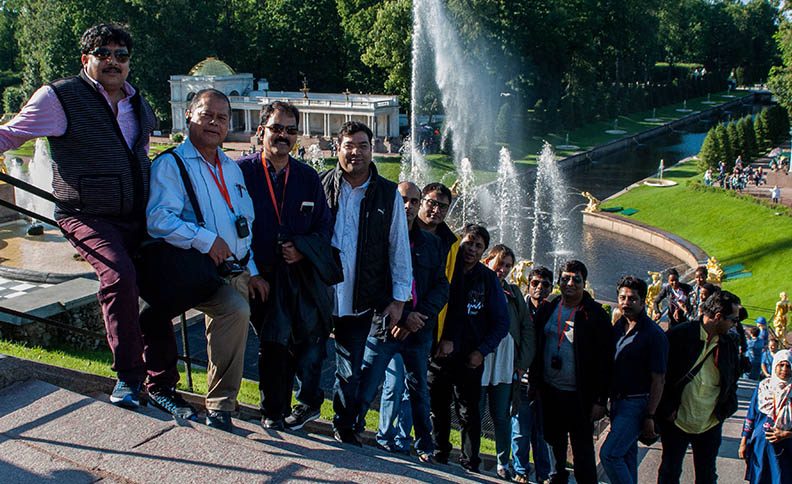 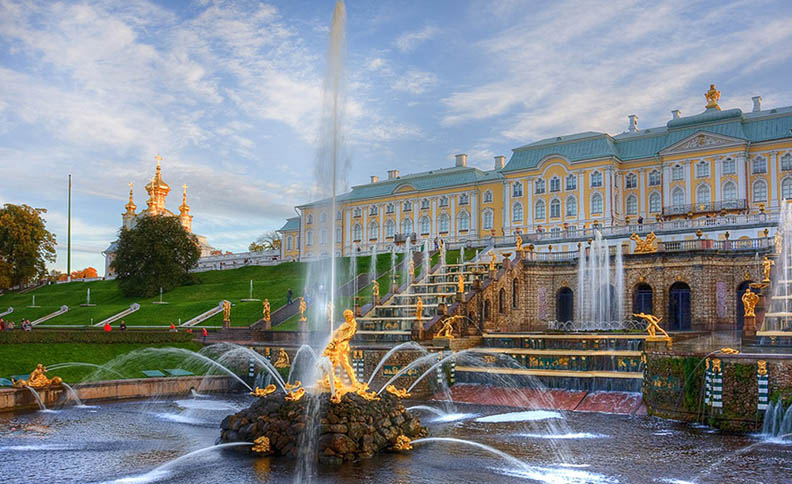 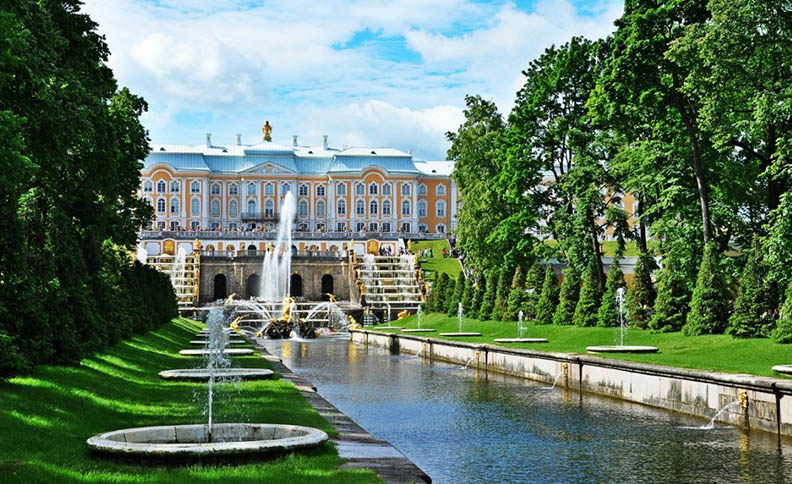 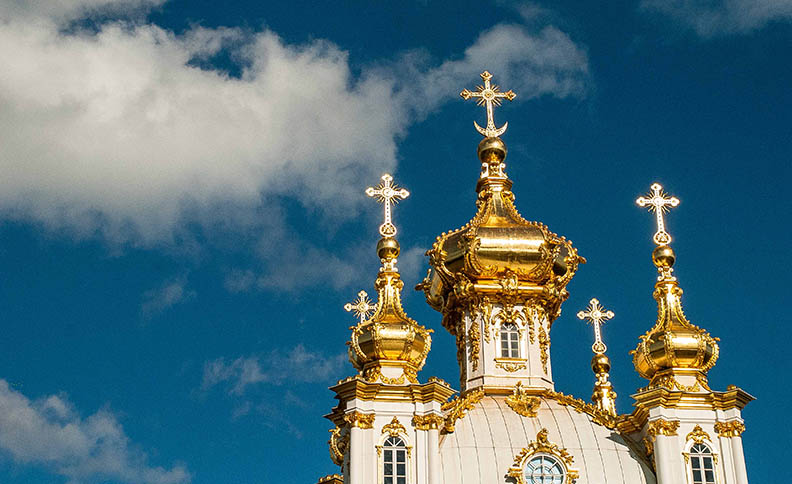 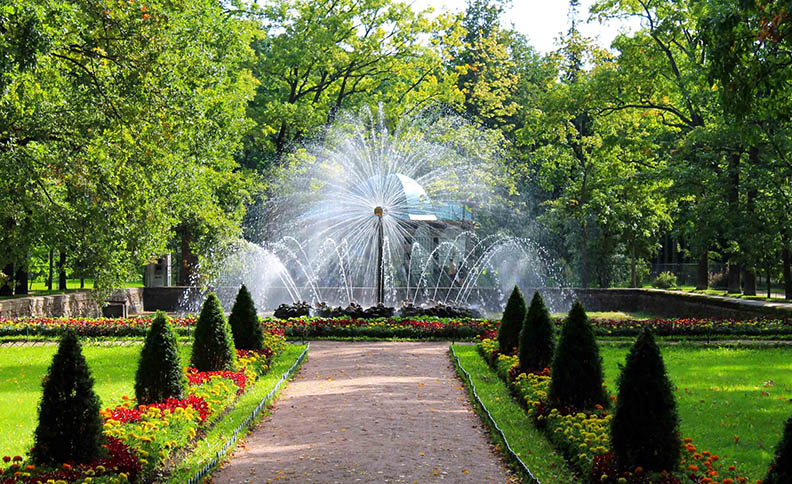 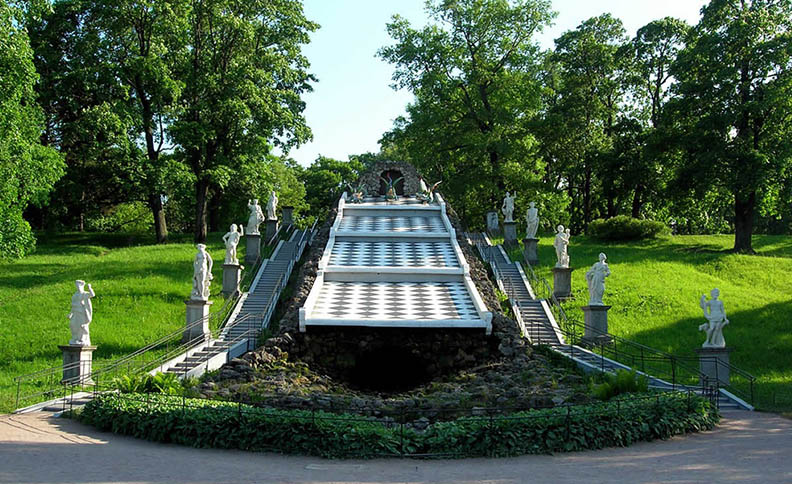 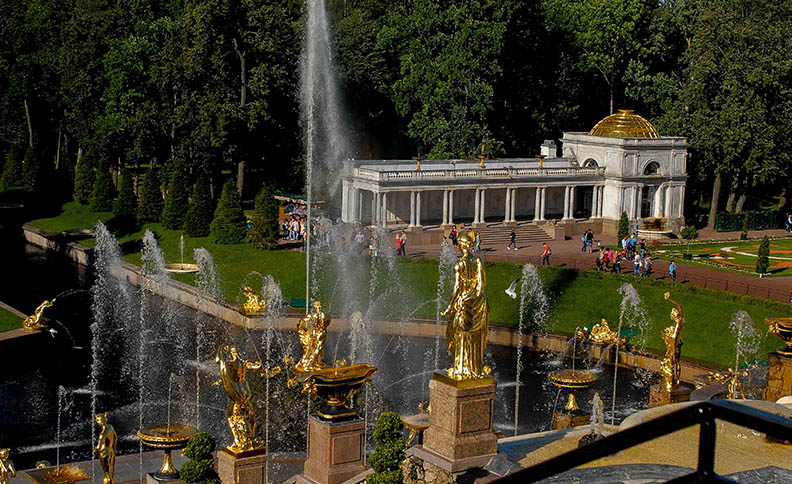 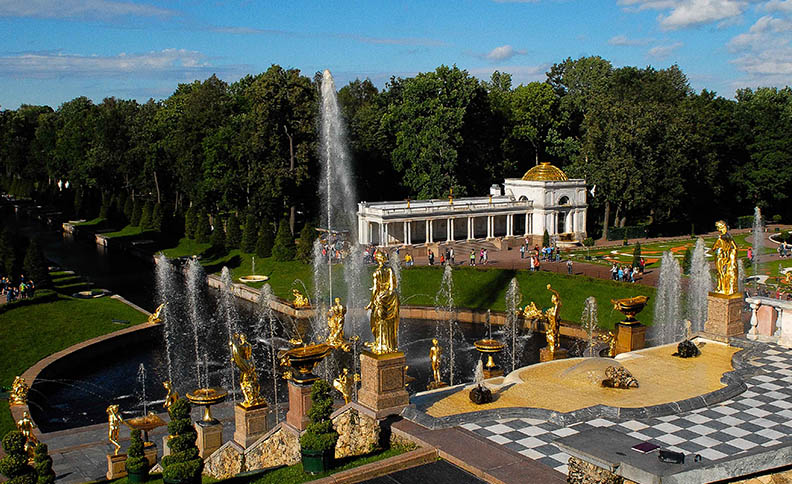 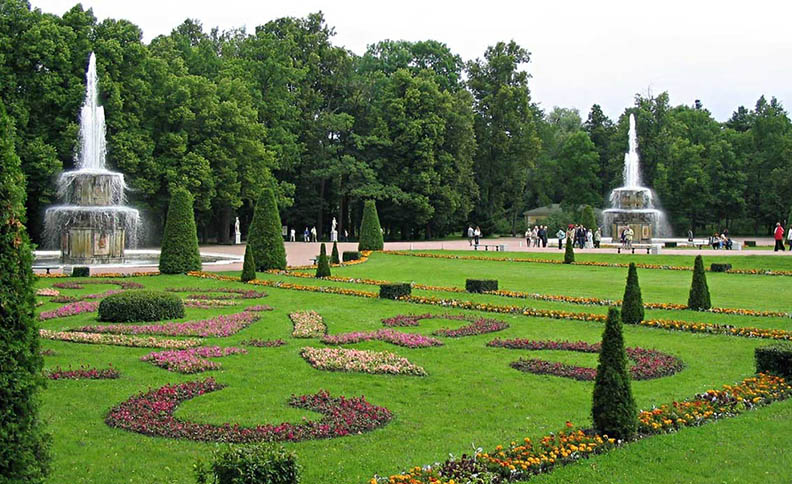 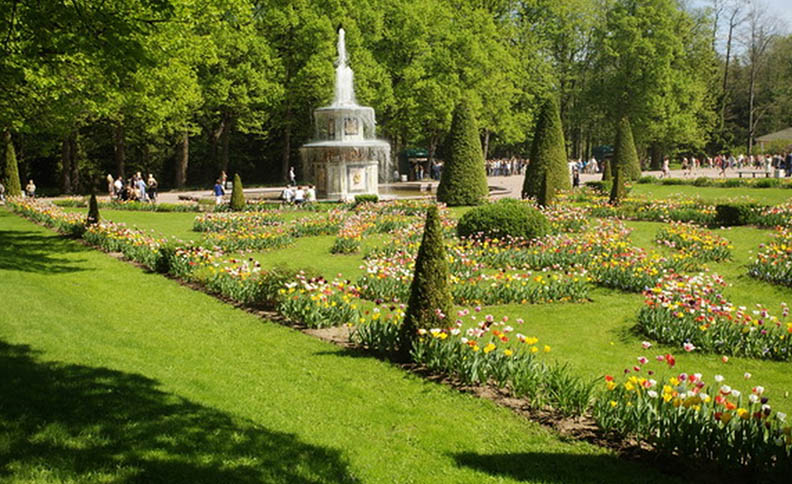 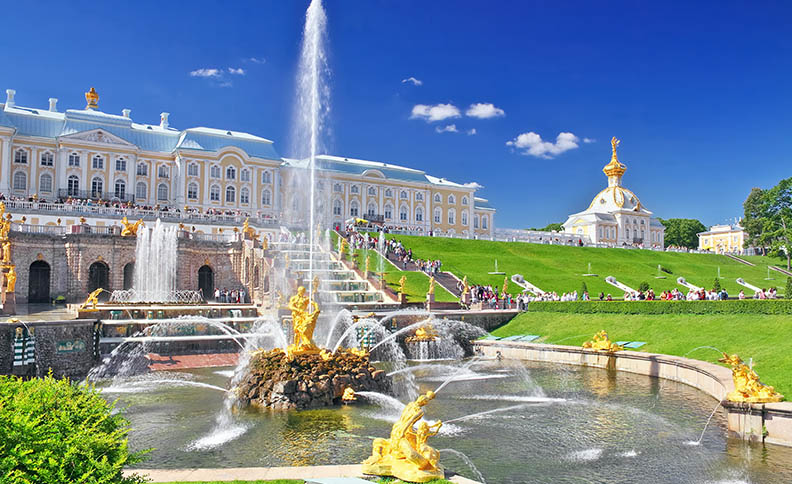 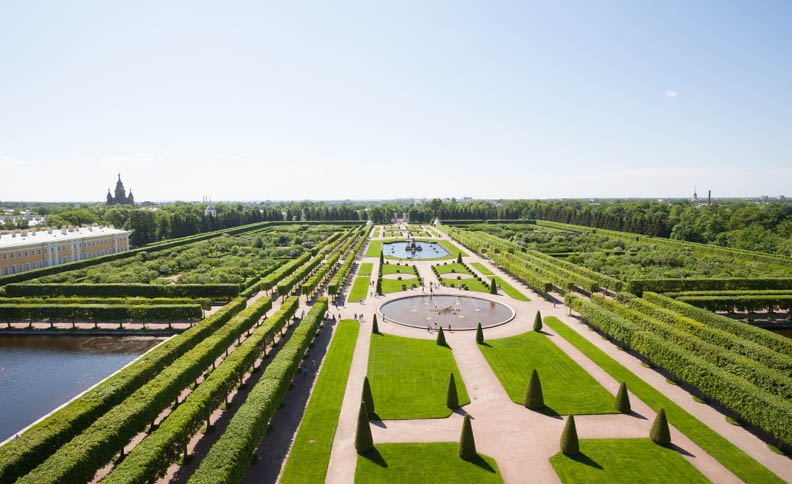 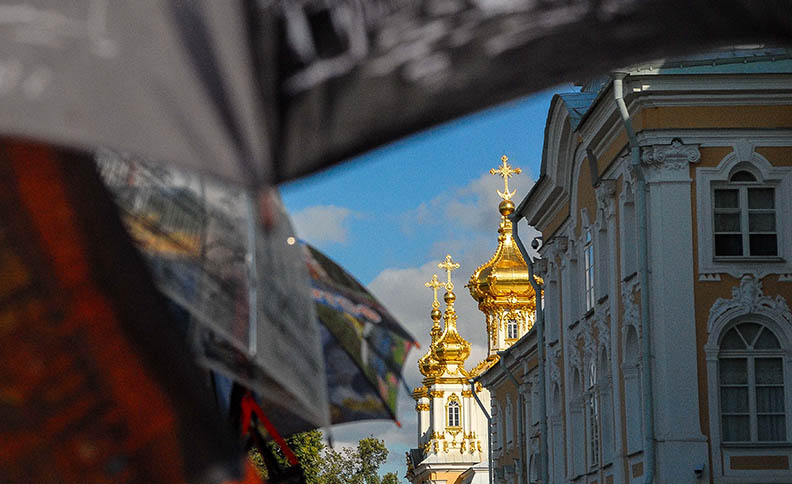 The Upper Park is the smallest covering the territory of 15 hectares. It was laid in Peter I’s time to counter balance the composition with the Peterhof Grand Palace and the Lower Park. It had functional purpose from the beginning, where water storages were built and vegetable garden was laid. In the middle of the 18th century the formal garden appeared here. Five fountains, two square ponds decorate the Upper Park. The compositional centre is the Neptune fountain bought in Germany and installed in 1799.

The Lower Park is situated on 102.5 hectares. The Lower Park was designed as a typical formal or regular park with symmetrical layout of its grounds. The canal decorated with 14 fountains divides the ensemble into the western and eastern parts. The slope of the hill, which is a natural border of the park, was transformed into waterfalls. Three cascades arranged along the slope.

The Grand Cascade forms a decorative pedestal for the Grand Palace. It was built by the order of Peter I to glorify Russia’s might and power. It was built in the early 18thcentury but its present-day appearance dates from the 19th century. It consists of 17 artificial waterfalls linked by 5 arches of a grotto, 39 gilded bronze statues, 29 bas-reliefs, 198 water jets and around 100 fountains.

In the centre of the water bowl is the impressive figure of Samson Rending the Lion’s Jaws. The sculptural group was put up in 1735 to commemorate 25th anniversary of Russia’s victory of Poltava battle, which was on St. Samson’s Day on 27 June 1709. The composition is dedicated to the victory of Russia in the Northern War with Sweden. St. Samson personifies might and power of Russia and the lion is an element of the Swedish coat of arms. From the lion’s mouth shoots a 20-metre-high vertical jet of water, the highest in all of Peterhof. In 1801 the original statue was replaced by a new bronze one by the prominent Russian sculptor D.Kozlovsky. During the WWII it was stolen by the Nazis and recreated after the war by L.Simonov and N.Michailov. In September 1947 Sampson resumed its place in the fountain complex of the Lower Park.

The Chessboard Hill Cascade is decorated the eastern part of the park. It was built in Peter I’s time, in 1739 three dragons were installed on top, and in 1770ies the white and black squares appeared on the cascade platform.

The Golden Hill Cascade is the main fountain display of the western part of the park. It was designed in 1720 and completed in 1732 by Zemtsov.

The Lion’s Cascade was executed by A.Voronichin in the late 18th century. In 1845-50 it was reconstructed by Shtakenshneider. It owes its name to the lions decorated the fountain.

The majority of the fountains were built here in the first quarter of the 18th century, such as the Pyramid fountain, Adam and Eve fountains, the Favorite, the Sheaf and Bell fountains, the trick fountains. Later the Roman fountains, Chinese Parasol, and the Sun fountain appeared.

The Water-Supplying System of the Fountains

The fountain system in Peterhof was designed by Russia’s hydraulics engineer V.Tuvolkov. It was completed in 1721-22. Unlike the common fountain systems employing pumps in order to feed fountains with water, the water-supplying system of the Lower Park is operated by natural gravity. The problem was solved by making use of the geographical position of the territory. The water comes from many springs at the hills of Ropsha located in 22 km from St. Petersburg and 60 meters above the sea level. Water flows down to Peterhof by 9 canals, and then comes to 16 large artificial ponds. The second level is nearly 16 meters above the sea. From these ponds, moved by gravity, water runs through underground pipes to the fountains. Then water empties into the Gulf of Finland.

The museums of the Lower Park include the Special Treasury, the Grottoes of the Grand Cascade, the Monplaisir Palace, Catherine’s Block, the Bath House, the Aviaries, the Hermitage, the Marly Palace, and the Museum of the Imperial Yachts.

Visit the grand locations Peterhof Parks  and many more that St Petersburg has to offer!