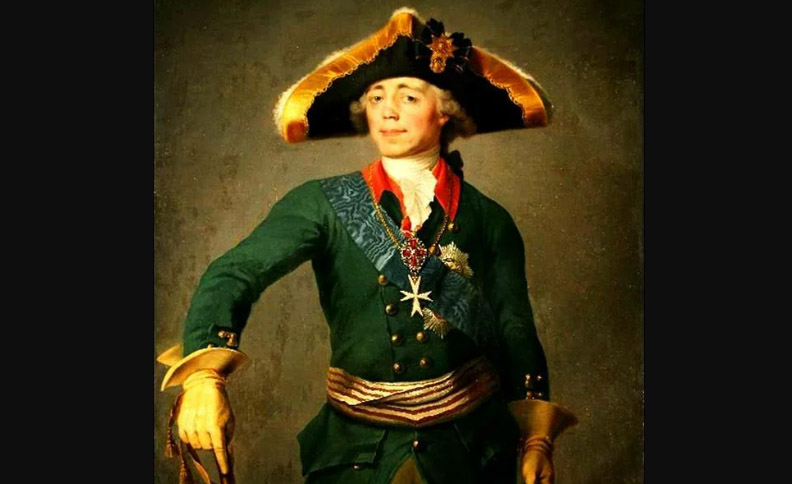 Emperor Paul I was the son of Emperor Peter III and Empress Catherine II. The long-expected crown passed to him at the age of forty-two. His father was murdered, his mother ruled the country; he himself had been raised by the strangers. This did not, however, prevent him from acquiring an excellent education. He received a brilliant knowledge in mathematics, engineering, shipbuilding and history. He spoke five languages and was deeply religious. Paul I was married twice; the first wife died giving birth to a child who also died. The second wife was a German Princess who converted to Orthodoxy as Grand Duchess Maria Fedorovna. She bore him four sons and six daughters.

When Paul inherited the throne, he attempted to turn the country around. He passed a series of reforms designed to improve the Russian army. Civil servants were expected to earn their pay honestly and corruption was harshly punished. In 1797 he changed the law of inheritance of the throne and the crown passed from father to son. The Russo-American Company was established to start trade with the United States. A medical school was founded in St Petersburg. In 1798-99 Paul joined the anti-French alliance; there were Suvorov’s campaigns in North Italy and Switzerland and Admiral Ushakov’s victory in the Mediterranean Sea. Paul lived in constant fear to be assassinated and he commissioned a castle in the middle of St Petersburg. In 1801, after forty days of his residence, Paul was murdered in his bedchamber of St Michael’s Castle by two former favorites of Catherine II, the Zubov brothers.