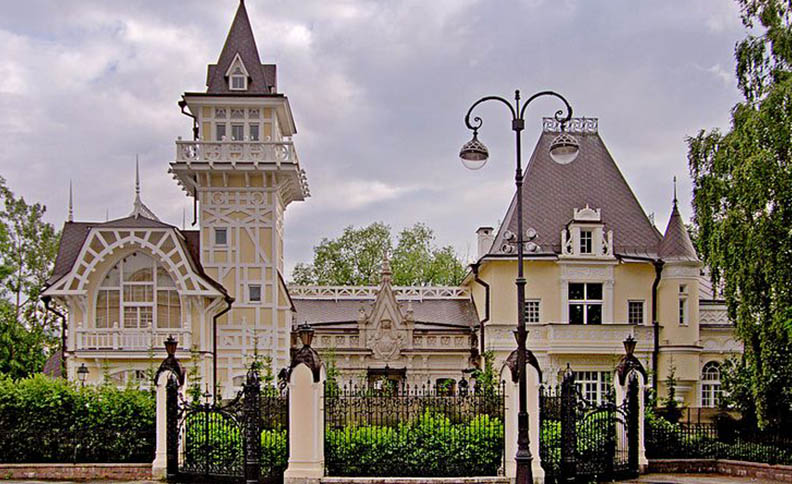 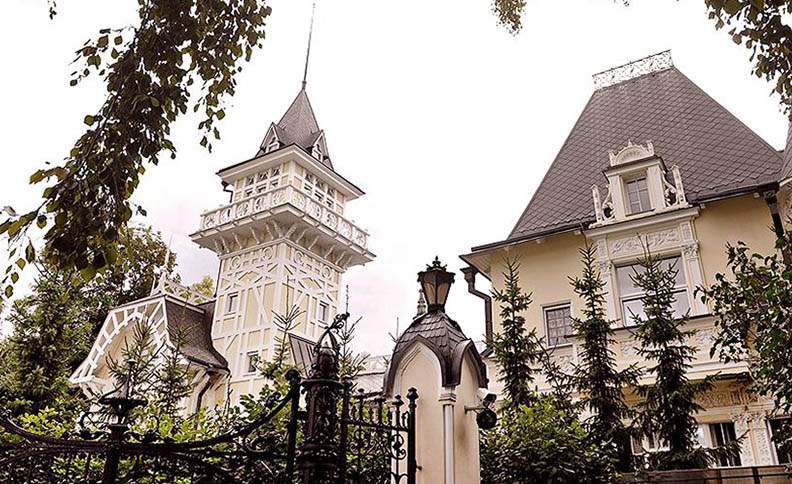 A fairytale castle, the building was built in 1834 according to the project of the Stackenschneider. At the beginning of the XX century, she passed to Countess Kleinmichel, wife of Colonel Preobrazhensky Regiment N.P. Kleinmichel.

Initially, the building was conceived as an example of the Art Nouveau style, later gabled neo-Gothic towers, gates with wrought-iron lamps, window grills were added. In addition to the impressive architecture of the old mansion, it is also worth noting the unusual lattice of the gate and the ornament that adorns the rods. For passers-by from the lattice of the gate, a fiery salamander watches.

Salamander is a mythical creature. She adorns steel rods. The countess’s husband showed heroism in putting out the fire of the Winter Palace, for which he received the right to depict a winter coat of arms engulfed in fire.

The salamander became a reminder of the exploits of Count P.A. Kleinmichel. In 1893, the countess acquired or rather rented this house for 90 years. Maria left a mark in the history of St. Petersburg as the organizer of grand receptions and balls. At the end of January 1914, the countess had a grand costume party at Maslenitsa — 300 guests were invited. It was a great St. Petersburg event. The guests performed in luxurious oriental dresses.

In 1918, the cottage was nationalized. In the spring of 1920, the building was renovated by members of the communist subbotnik, was adapted for a joint club of working rest houses on Kamenny Island. It is here that V.I. Lenin attended a small concert in the evening of July 19, 1920, getting acquainted with the first experience of organizing holiday homes for workers in our country. Thanks to this event, in 1976 the mansion was included in the list of memorable Leninist places and is protected by the state as a historical monument.

Maria Kleinmichel, the last owner of the cottage on Kamenny Island, died on November 19, 1931 in Paris. She is buried in a cemetery in Versailles with her brother Alexander.

The last reconstruction of the building was carried out in 2006-2007. Now it belongs to the Administration of the President of the Russian Federation and is called the House of Receptions.

We will be happy to receive you at this beautiful and unique cottage!