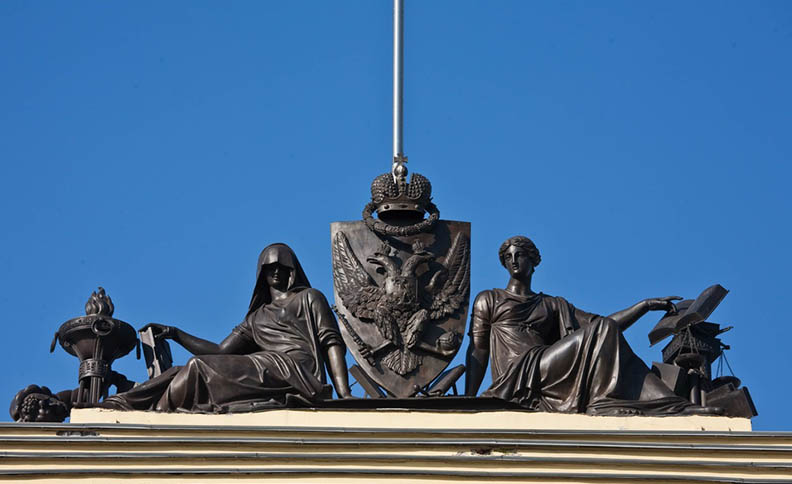 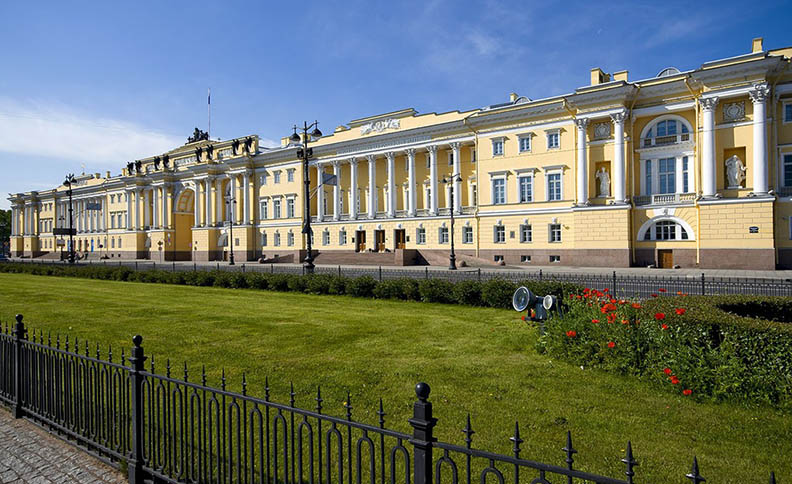 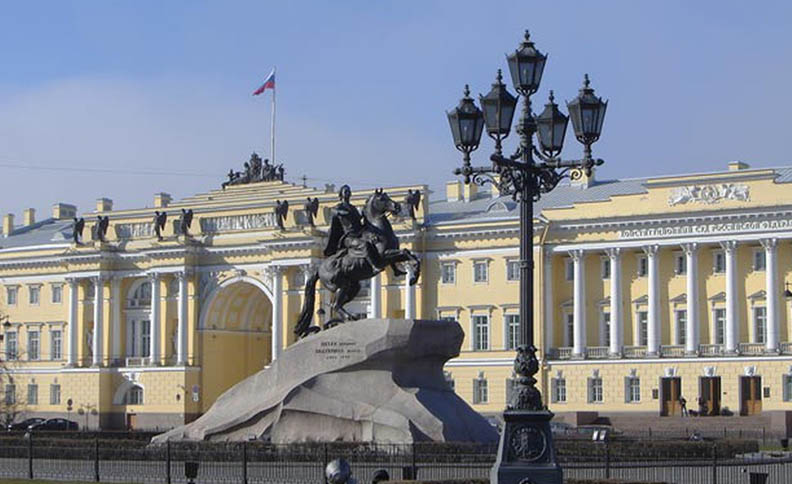 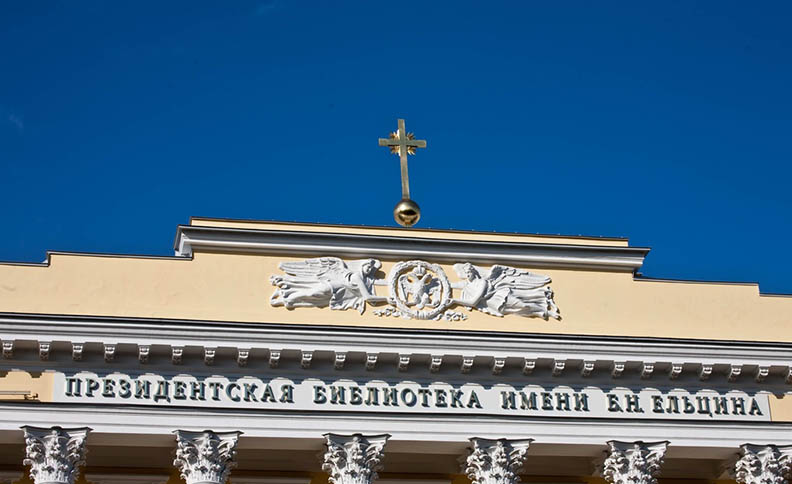 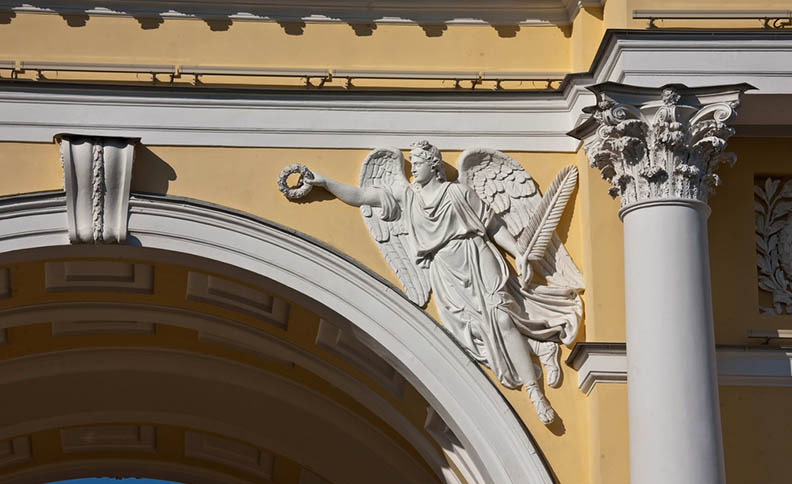 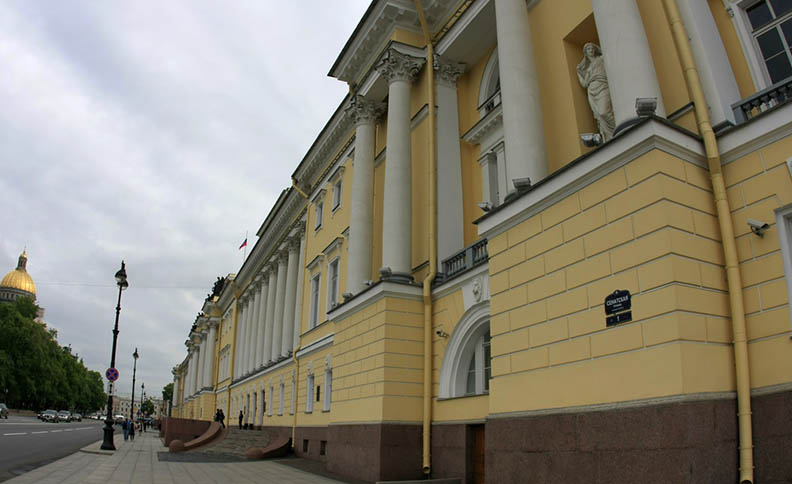 Senate Square came into existence due to the construction of the embankment along the Neva and the piers for the only pontoon bridge connecting the city centre with Vasilyevsky Island. Later, in 1760s the Senate was transferred to the square. The ensemble of the square took its final shape and its name in 1830s when architect C. Rossi erected new buildings for the supreme governmental bodies of Russia- the Senate and the Synod. They are joined together with the arch crowned with a sculptural group symbolising Faith and Law, as the Senate was the High Law Courts of Old Russia and the Synod was the High Body of the Russian Orthodox Church. Now they house the Constitutional Court of Russia. It is evident that Rossi took account of the Admiralty building already existing on the opposite side of the square and perfectly balanced the new buildings with the other one.

The equestrian monument to Peter the Great is one of the main symbols of Saint Petersburg commemorated by A.Pushkin in his poem The Bronze Horseman. This monument is one of the best samples of the world monumental sculpture. It was commissioned by Catherine the Great, who invited the French sculptor E.-M. Falconet to create it. The head of Peter was performed by Falconet’s pupil Maria Collot, the Russian sculptor Gordeev cut the pedestal. It is a granite monolith in the shape of a wave symbolising the access to the Baltic Sea, the snake at the hind hooves of the horse symbolises evil forces and the opposition, which Peter had to resist, and it also provides the third point of support. The monument was unveiled in 1782. On each side of the pedestal there is an inscription written in Russian and Latin: “To Peter the First – Catherine the Second”. Thus Catherine II displayed her readiness to continue reforms, which Peter the Great had started.

The second name is Decembrists’ Square because the first armed uprising in Russia took place here on December 14th1825. The Decembrists were the nobles of top social position, brilliantly educated, landlords and top-ranking officers in the Army who defeated Napoleon in 1814, the idealists who believed in constitutional monarchy and abolition of serfdom. They returned back from France full of ideas of French utopianism and inspired by the French Revolution of 1789. After the death of Alexander I they refused to swear allegiance to the new Emperor Nicholas I, as they wanted to proclaim his brother Konstantin a constitutional monarch. The uprising was severely suppressed.  Five leaders were executed. Hundreds were exiled to Siberia.

A century later the square was named after the Decembrists.

Visit the grand locations Senate Square and many more that St Petersburg has to offer!
Contact us@ Russian InfoCenter to Book Classic Russia tour 5n/6d and more tour packages from India to Russia
Choose from flights ex Delhi, Mumbai & Calcutta