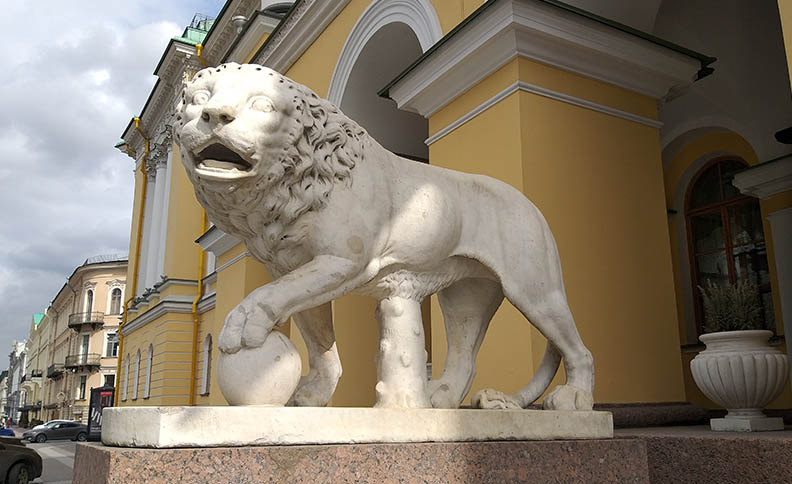 The streets of St. Petersburg are generously decorated with mythical creatures, they give the city a special charm and mystery. Walking around the city, you can meet lions, decanters and sphinxes, protecting bridges and building facades. All this is not just like that – each animal has its own purpose. Together they shape the style and emphasize the architecture of the city. Many of them are intertwined with Indian architecture. It would seem that Petersburg and India are so different, but how well fragments of Indian culture are written into the image of the city! In this article, we decided to go a little deeper into the history of the appearance of these mystical animals on the streets of the city on the Neva and look for references to Indian culture.

We bring to your attention three bewitching mystical creatures: sphinx, griffin and lion. We will turn to everyone with special attention and consider their history in more detail.

Well, let’s start with the sphinxes. What are they? In different peoples of the world, these mythical creatures have been described in different ways. So, in ancient Greece, the winged creature with the body of a lion or dog and a female head and chest was called a sphinx. In ancient Egypt, the sphinx was called a lying lion with the head of a person personifying the power of the pharaoh. The main difference between the Greek and Egyptian sphinxes is that the Egyptian sphinx was not worked out in detail, unlike the Greek. The Greek Sphinx had a very realistic body of an animal with an equally realistic but unemotional face. While the Egyptian sphinx, although it was made in perfect proportions, did not have such an animal origin as the Greek sphinx. 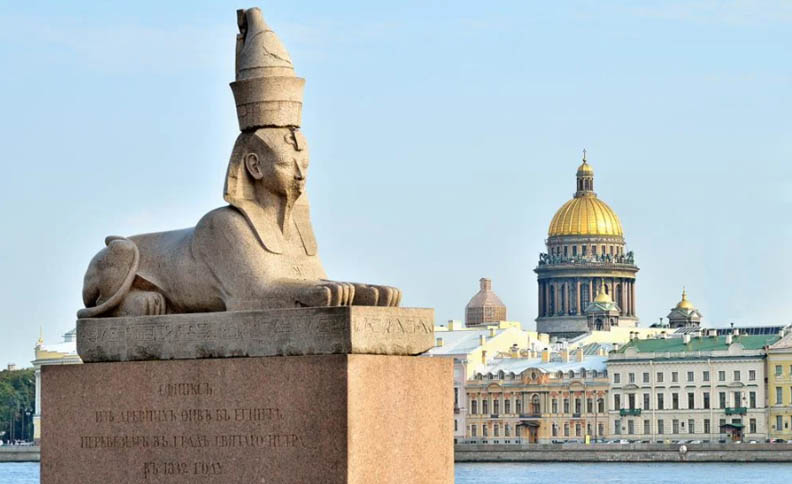 In St. Petersburg, you can enjoy the sphinxes and the ancient Egyptian and ancient Greek. The oldest sphinx and the first in terms of artistic value is the sphinx from the ancient Thebes in Egypt, brought to the city in 1830, bought at an auction in Alexandria. This beautiful work of art can be seen closer to the University Embankment. It is amazing that the ancient Greek sphinxes, with their realistic bodies of animals, can be seen on the Egyptian bridge over the Fontanka. 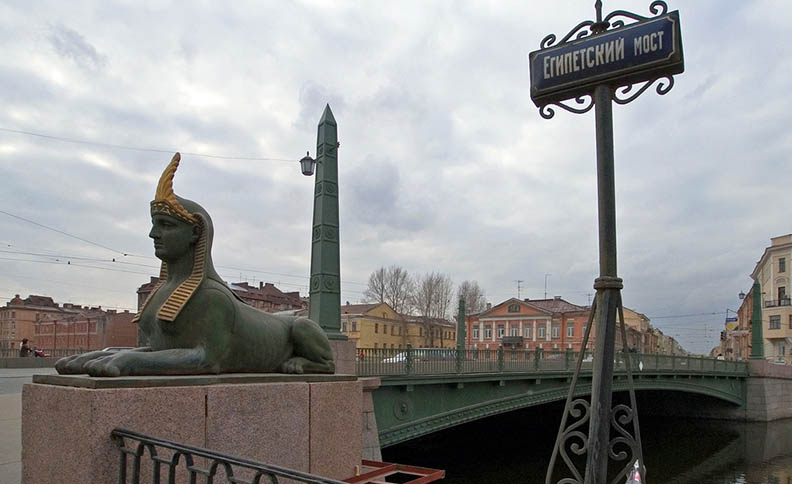 Next in line are the griffins. These are mysterious fictional winged creatures with spreading wings of an eagle and the body of a ferocious lion. They become symbols of power over heaven and earth, strength and vigilance. Griffins are also correlated with the images of the Scythian “animal style”. In Greece, it was believed that the griffins were the guardians of the gold mines of the Scythians. In later references to griffins, some details of their life appear. For example, the fact that they build their nests from gold does not enter into conflicts with heroes and gods.

Griffins were considered the most reliable guards of the gold pantries, which is why they were installed on the Bank Bridge. Apparently, griffins guard our finances even now – the St. Petersburg State University of Economics is currently located in the bank building. Bronze griffins also flaunt on the University Embankment, opposite the building of the Academy of Arts. Here, griffins adorn stone benches mounted on the sides of a granite staircase leading to the Neva. They seem to protect the Neva coast from negative energy, gracefully leading the way. 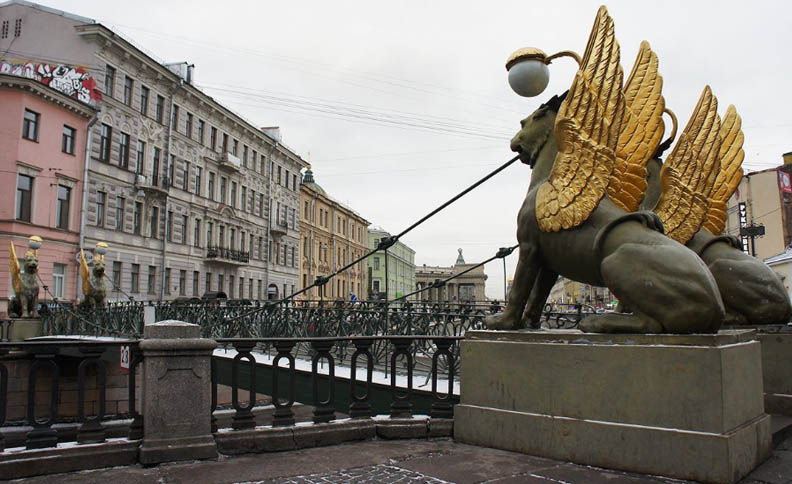 Griffins on Bank bridge, next to St. Petersburg State University of Economics

Lions in St. Petersburg can be found on every corner, on every second facade of the building. The city of Petra is rightfully protected by lions. They can be seen in completely different sizes and each with its own characteristics. Some St. Petersburg lions are made of marble, others of cast iron and copper. Brought from China, Israel or created in Russia. It was also believed that lions come from India, where they guard the holy city of Varanasi. Where, according to legend, the Buddha delivered his first sermon.

Fashion for these animals came from Europe during the time of Peter. Lion symbolizes courage, courage and greatness. Often you can see a lion with one paw on the ball, this is a lion-father, which meant the unity of the country. They can be seen decorating houses, parks and squares. Nowadays, lions can be seen at various institutions – restaurants and hotels, and not just at historical places and cultural objects 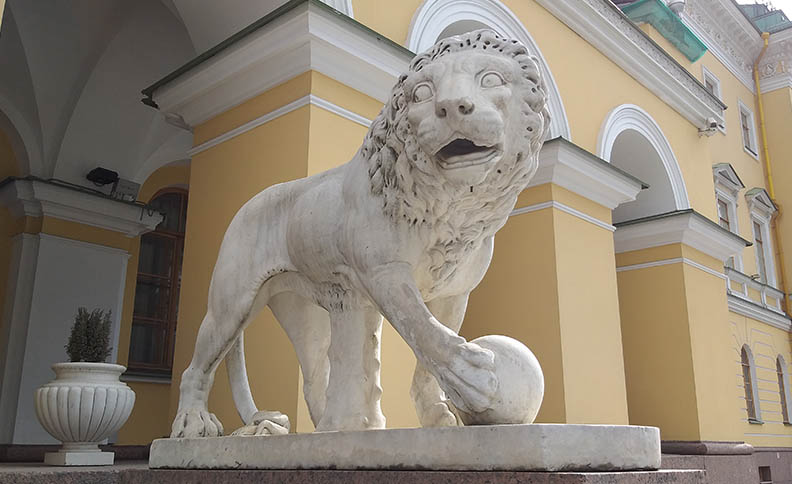 Lions in the Lobanov-Rostovsky mansionAt the end of the article we want to invite you to visit the places where these mysterious creatures live. To feel the participation of these mythical creatures in the harmony of architecture and history of St. Petersburg you need to see them with your own eyes. Walking to the addresses offered by us, you will plunge into the bewitching world of legends and history of St. Petersburg. 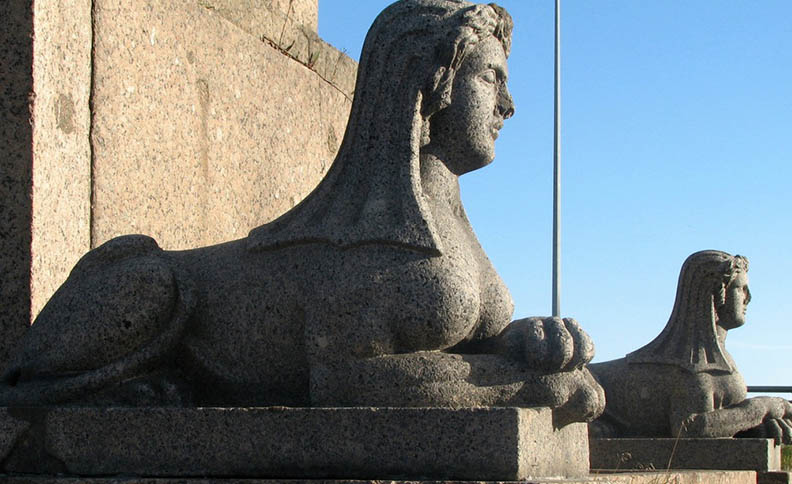 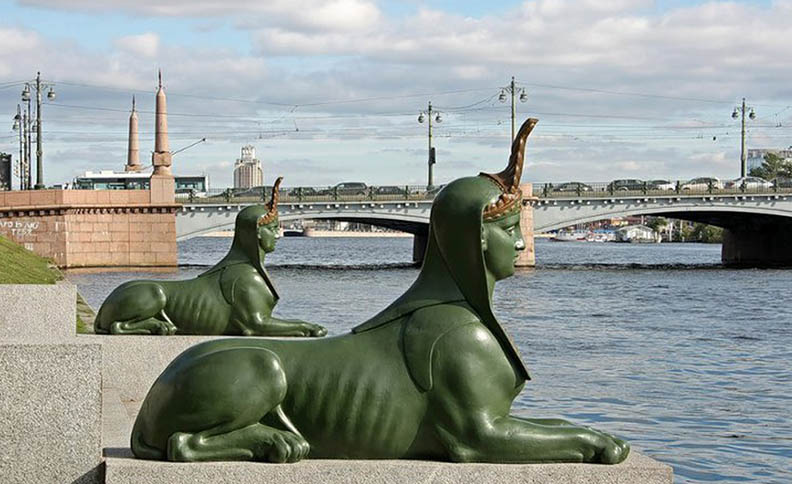 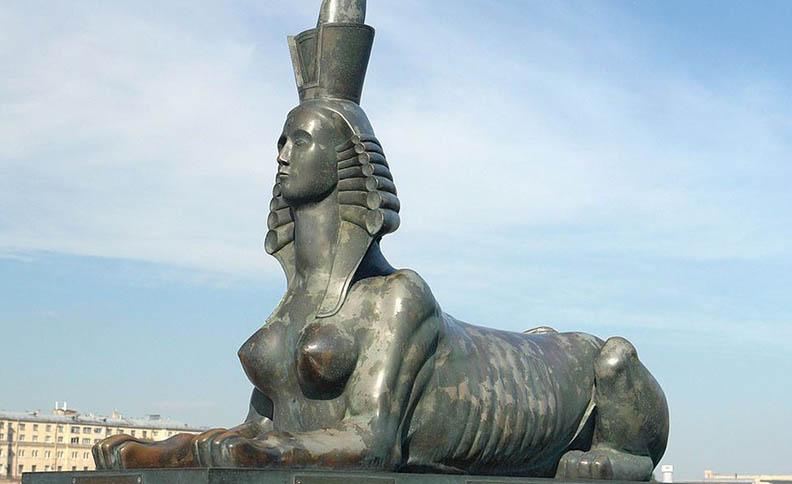 Monument to victims of political repression 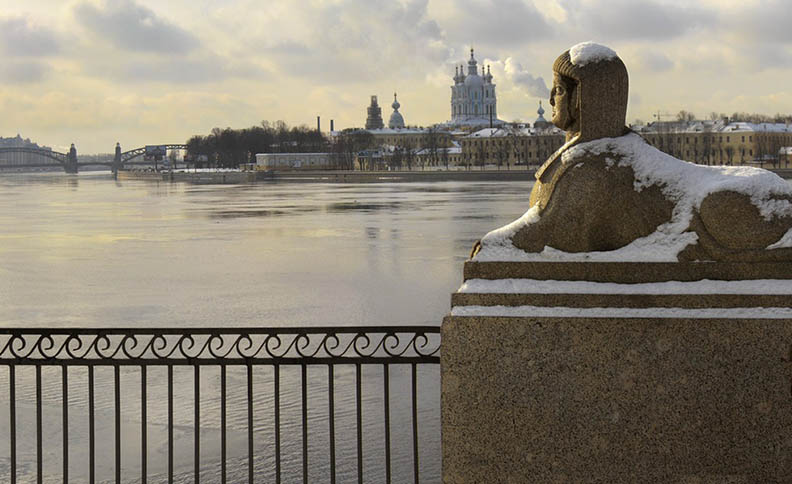 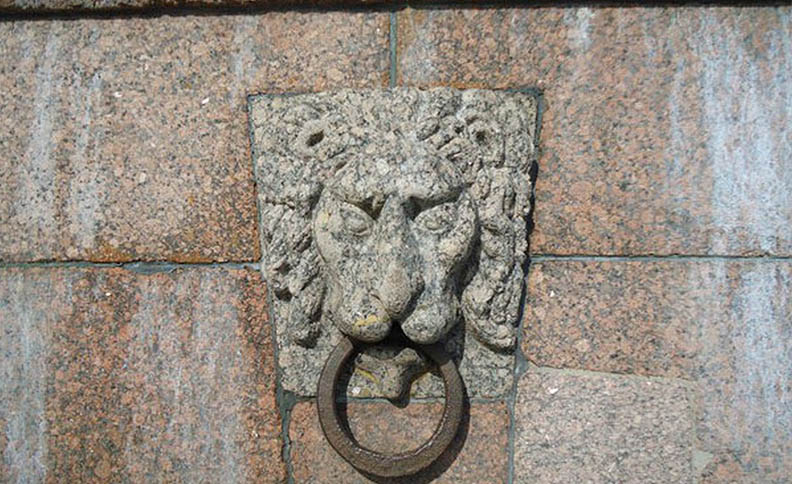 Lions on the spit of Basil Island 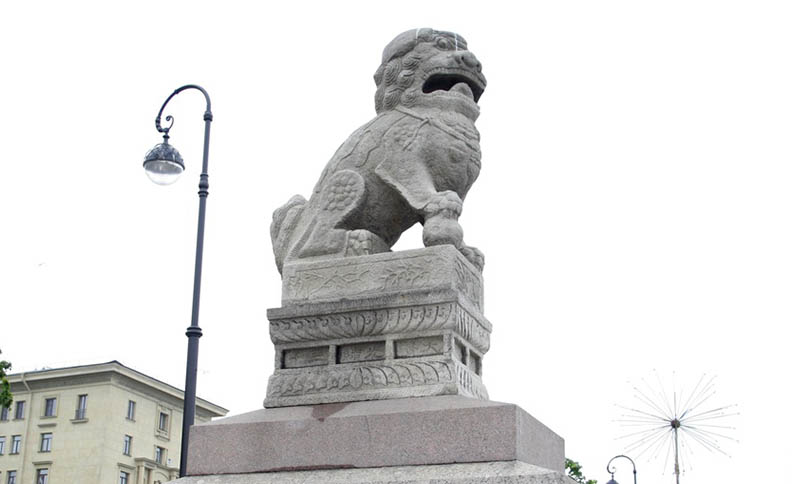 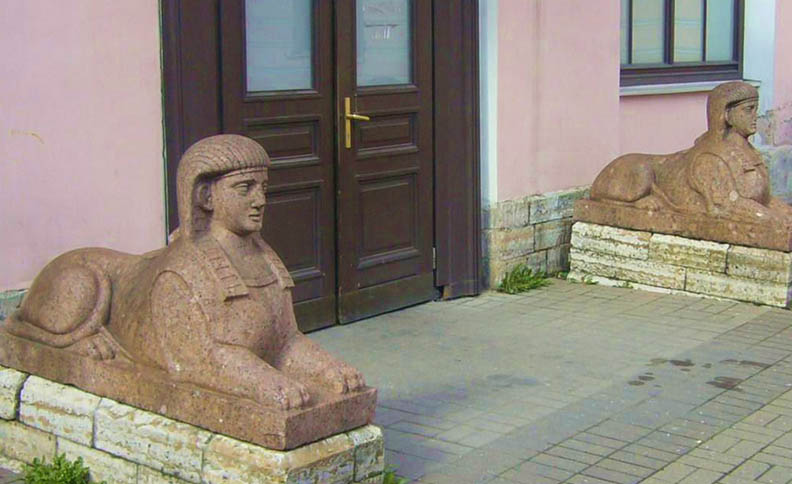 Lions in the garden of Stroganovsky Palace 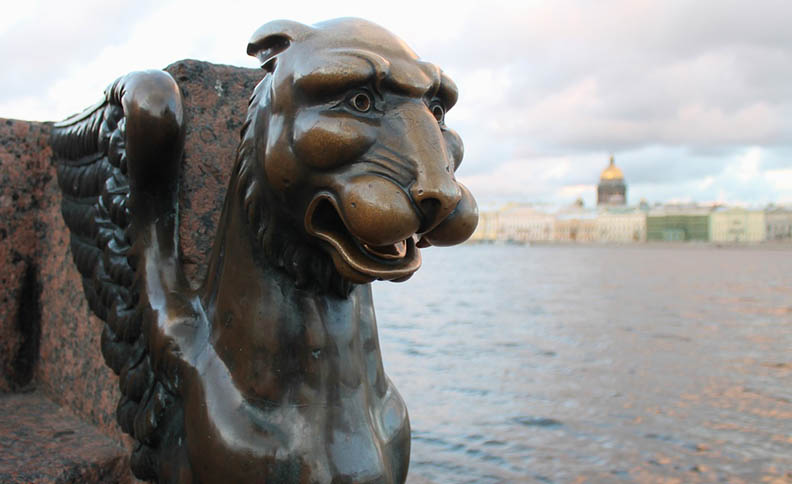 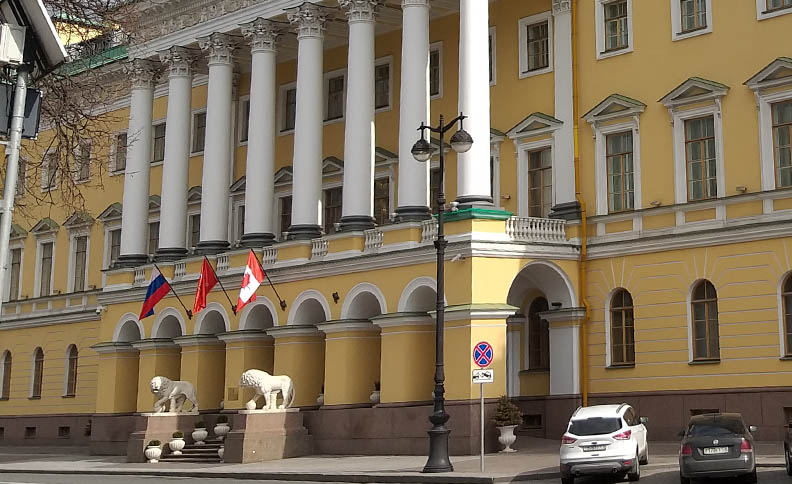 Lions in the Lobanov-Rostovsky mansion 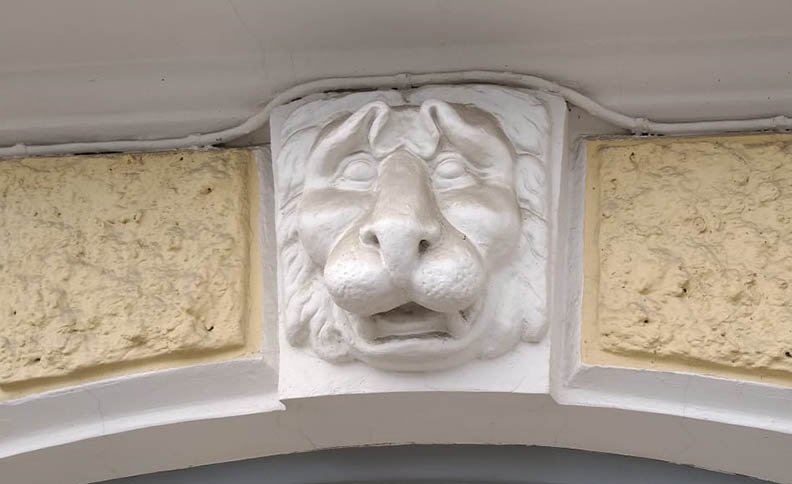 Decoration on the residental building on Basil Island 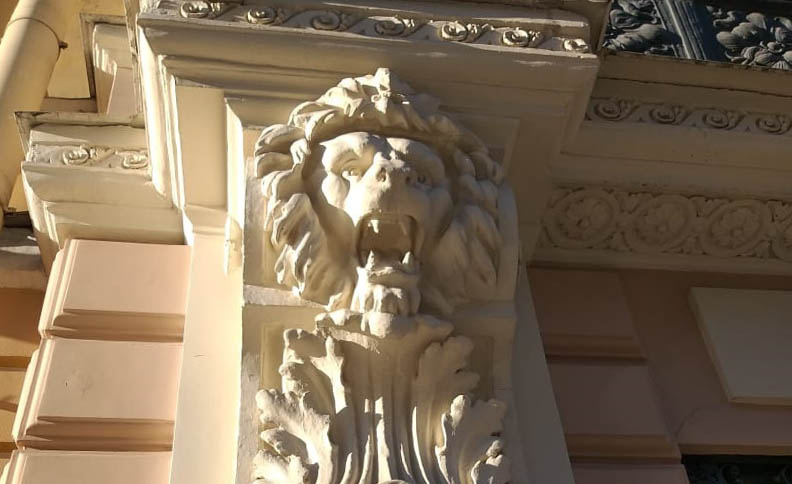 Decoration on the residental building on Itaianskaya Street 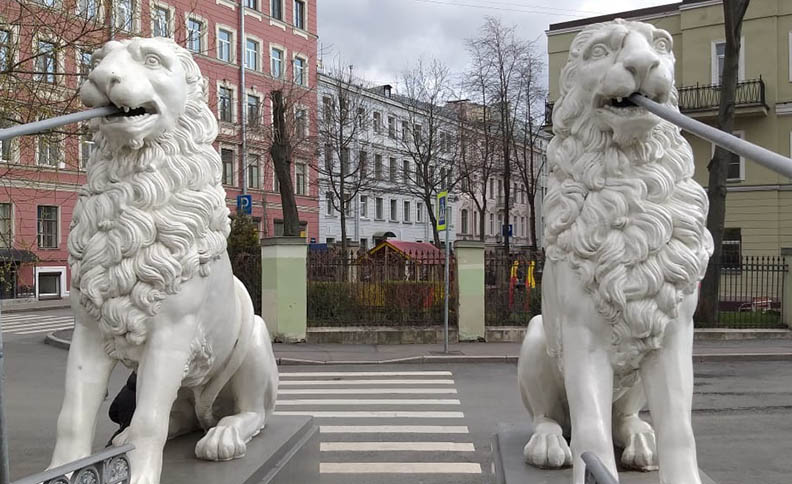 Visit the grand locations Lions, Sphinxes and Griffins and many more that St Petersburg has to offer!
Contact us@ Russian InfoCenter to Book Classic Russia tour 5n/6d and more tour packages from India to Russia
Choose from flights ex Delhi, Mumbai & Calcutta