St. Peter and Paul Cathedral – the burial vault of the Romanovs 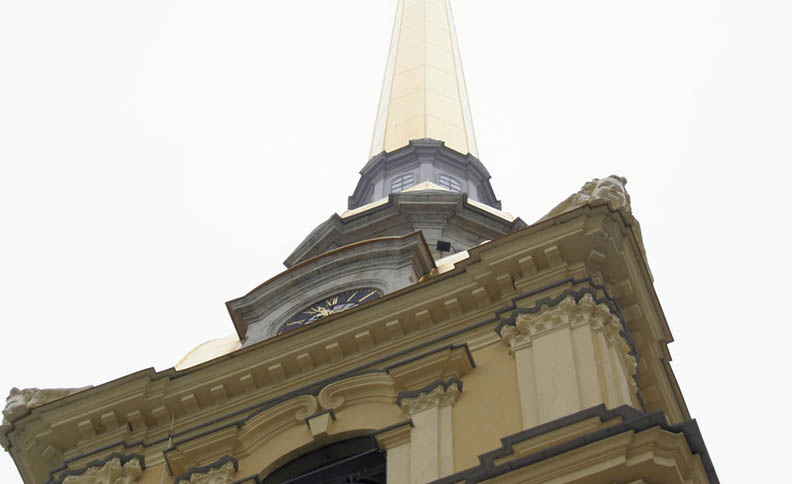 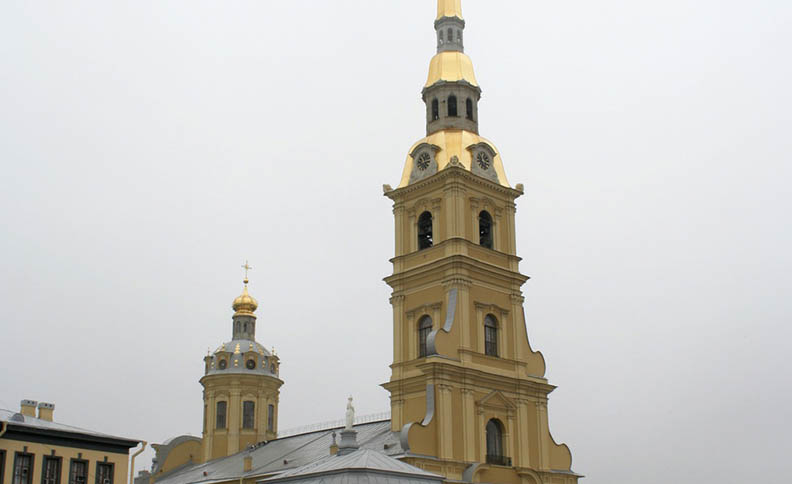 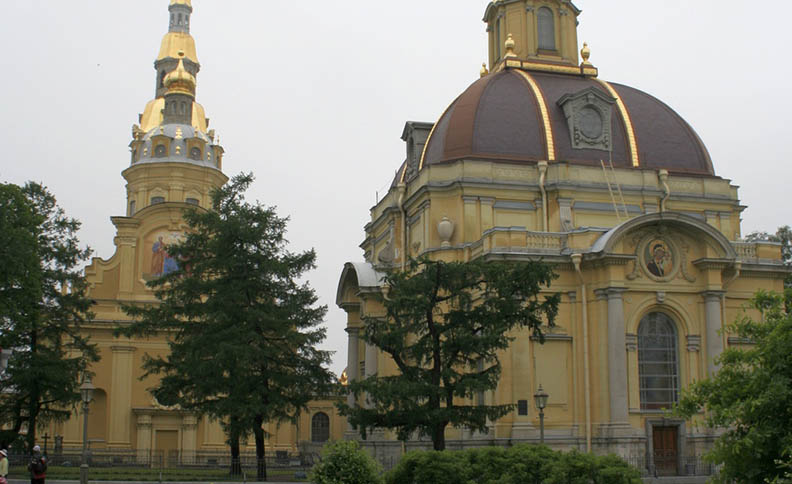 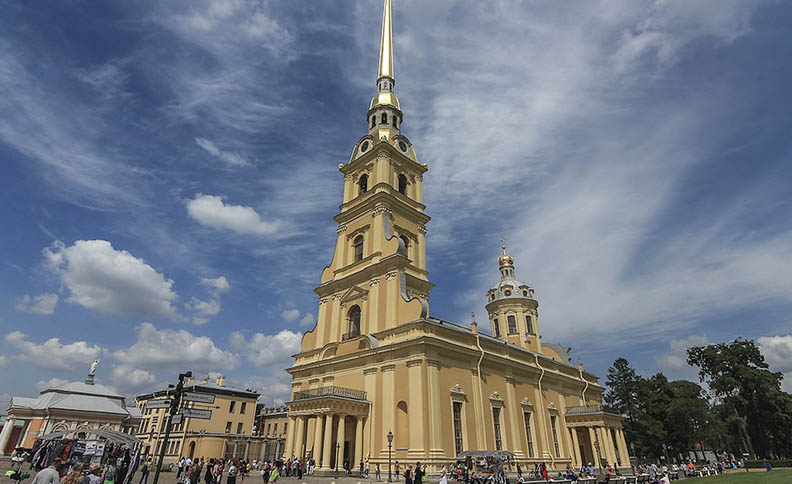 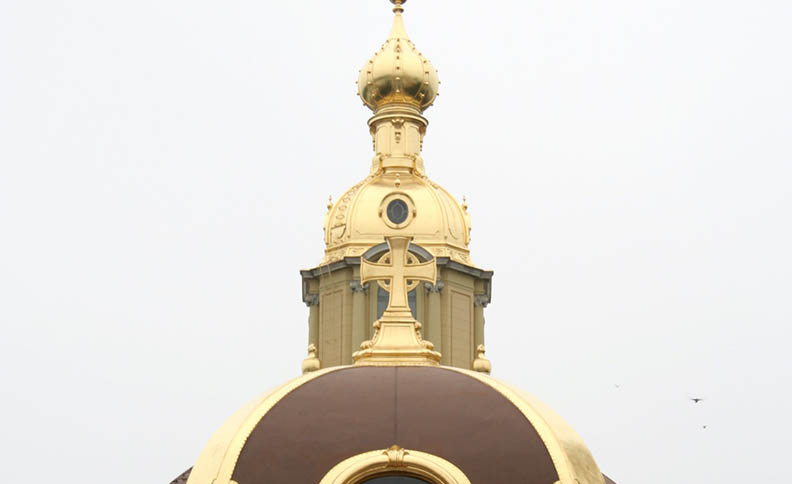 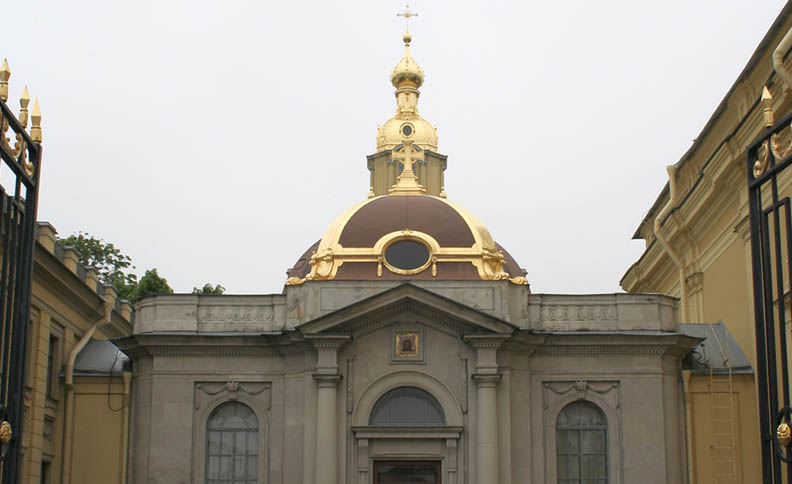 The Saints Peter and Paul Cathedral is a unique architectural monument designed by Domenico Trezzini in the style known as Peter’s Baroque. It was developed in St. Petersburg in the first quarter of the 18th century. Very simple, elegant exterior practically without decorations and, on the contrary, the interior was elaborately designed. The construction lasted from 1712 till 1732, in 1733 it was consecrated. The Cathedral is 122.5 meters high and it is one of the tallest buildings in the city. The gilded spire is crowned with a ball, on top of which there is a figure of an angel holding a cross (the wing span is 3.8 meters). On the bell-tower there is a tower clock with chimes.

The interior of the Cathedral differs greatly from the Russian churches of the 14-17th centuries and reminds the interior of a gala room of the 18th century. According to the old Byzantine tradition churches were usually cross- shaped, while this cathedral is shaped as an elongated rectangle. The walls are painted to imitate marble instead of icons or     frescoes on them. The cornice is decorated with eighteen oil paintings depicted the life and passions of Christ created by remarkable artists of the 18th century – Belsky, Matveev, Ignatiev, and Gsell.  They are of special interest being one of the first samples of Russian realistic art. Five chandeliers and large windows add secular atmosphere to the interior. The typical Russian Orthodox churches are dark inside. The cathedral was meant by Peter I as a monument of Russian military glory. The walls of the cathedral are decorated with the exact copies of the banners captured as trophies during the wars with Sweden and Turkey in the 18th century (the originals are in the Hermitage Museum). Traditionally trophies of wars were kept in palaces.

The iconostasis was designed by Trezzini. It was made in Moscow by the talented architect Ivan Zarudny (1722-1727). Forty masters participated in the work and it took them several years to turn the plain wood into a triumphal arch with soft draperies, tassels, garlands of flowers. Forty three icons of the iconostasis were painted by the group of Moscow artists. The iconostasis was brought to Saint-Petersburg and installed in the cathedral in 1729.

The pulpit of the Cathedral is made of carved wood and decorated with oil paintings and several wooden sculptures: Apostle Peter, Apostle Paul, and four Evangelists with their symbols (Saint Matthew with an angel, Saint Mark with a lion, Saint Luke with a bull, Saint John with an eagle). It was the first Cathedral in Russia with a pulpit, which is the attribute of a Catholic church.

The cathedral was visited by the tsar and the members of the royal family. During the service the tsar stood on a special place called the Tsar’s place. It is upholstered with red velvet with the representation of the double-headed eagle embroidered with silver and gold threads.

Most of the sarcophaguses are alike and made of white marble with the traditional Russian Orthodox Cross on top. The tombs of the ruling members of the family are decorated also with the double-headed eagles at the corners. The sarcophaguses were put here for the decoration in the 19th century and they are empty. The bodies were entombed under the floor level. The tomb of Alexander II and his wife are different and made of Russian semi-precious stones- jasper (5 tons) and   rodonite (6.5 tons). On the 17th of July 1998 the funeral ceremony was held in the cathedral. Nicholas II, his wife Alexandra, their daughters Olga, Tatyana, Anastasia and servants were buried in Saint Catherine’s Chapel of the cathedral. On the 28th of September 2006 Empress Maria Fedorovna was buried next to her husband Alexander III. She escaped Russia after the revolution, dying in Denmark in 1928.

Visit the grand locations St. Peter and Paul Cathedral – the burial vault of the Romanovs  and many more that St Petersburg has to offer!
Contact us@ Russian InfoCenter to Book Classic Russia tour 5n/6d and more tour packages from India to Russia
Choose from flights ex Delhi, Mumbai & Calcutta