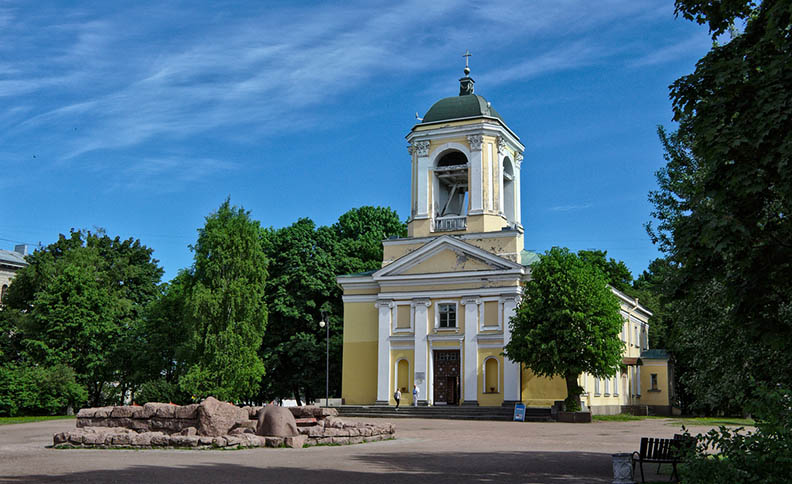 The Church of Saints Peter and Paul in Vyborg is the only surviving Lutheran cathedral consecrated on June 29, 1799.

Vyborg is a city with a difficult history, located on the shores of the Gulf of Finland.  Based on the retelling of the chronicles, a Novgorod elder founded the “city by the sea” in the 9th century and named it “Choice” in honor of his eldest son. At the moment, various peoples live in the city, because this territory has repeatedly passed into the possession of different states: Sweden, Finland, Russia. All pre-revolutionary rulers of Russia from Peter the Great, except Peter II and Ivan VI, are buried inside this cathedral. The magnificent baroque interior is unique from other Orthodox churches.

In the annals you can read about the communities that lived in Vyborg since the middle of the 17th century. It is known that they did not have a local church. At first, public services were held in the hall of the city council. From the beginning of the 18th century, they were held in the Finnish Lutheran church, located in the former cathedral of the Dominican monastery.

In 1783, Empress Catherine II visited the city of Vyborg, and signed a decree on the construction of a new Lutheran church. Fundraising took place in the cathedrals of St. Petersburg, Narva, Tartu and Riga. At the end of the 18th century, the unification of the German and Swedish communities began to erect a new stone church. The building was built in the style of classicism in 1793-1796. designed by architect Y.M. Felten (1730-1801) and resembles the church of St. Anne (Evangelical Lutheran Church) built by him in St. Petersburg. Construction work was led by architect I. Brockman (1745-1812). Initially, the church was supposed to have a name in honor of St. Catherine the Empress, but the construction of the building was completed under Emperor Paul I and therefore received the name in his honor.

The cathedral was reconstructed in 1885 according to the project of the architect Y.Y. Arenberg (1847-1914). After the capture of the city by Finnish troops in 1940, public services were held in the church (from the end of the summer of 1941 to June 11, 1944). After the war, the Pioneer Center was housed in the building and since 1991 the church was returned to the Lutheran community, in 1994 it was again consecrated.

The cathedral attracts tourists from all over the world with its unique history, thanks to public services, instrumental concerts and excursion programs you can feel the atmosphere of this place and from May to October climb the unique needle spire of the bell tower, where the whole city is visible from a bird’s eye view.

Visit the grand locations Church Of Saints Peter And Paul (Vyborg)  and many more that St Petersburg has to offer!
Contact us@ Russian InfoCenter to Book Classic Russia tour 5n/6d and more tour packages from India to Russia
Choose from flights ex Delhi, Mumbai & Calcutta