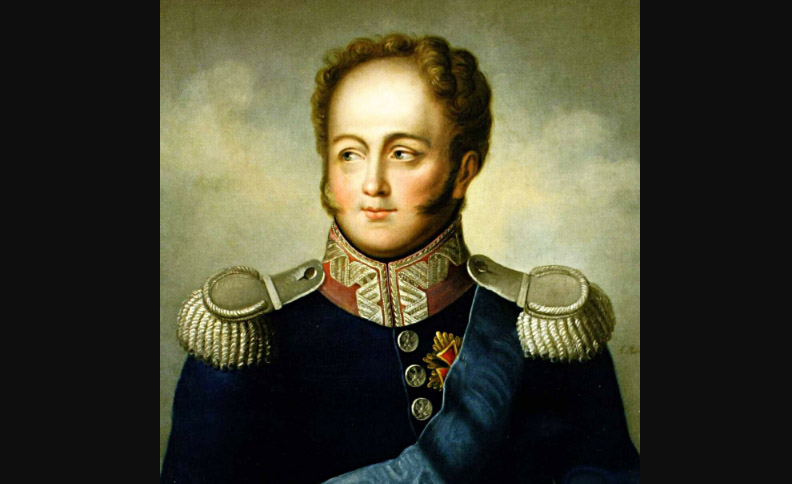 Emperor Alexander I was the eldest son of Emperor Paul I and favorite grandson of Catherine II, who personally supervised the education of Alexander. He was known for his clever mind, diplomacy, and indecisiveness. When he heard about the plot against his father, he did not take any precautionary measures. When Alexander was 16 years old he married Princess Luise Marie Auguste of Baden. She converted to Orthodoxy as Grand Duchess Elizabeth Alexeyevna. She gave birth to two daughters, who died in infancy. The first half of his reign was a period of moderate and liberates reforms started by his grandmother Catherine II. Alexander established the State Council; opened universities in Kharkiv, Kazan, St Petersburg (1819), the Tsarskoe Selo Lyceum (1811). In 1805, Russia was drawn into anti-Napoleonic wars, ending with humiliating treaty in Tilsit. This was followed by wars against Turkey and Sweden and the French invasion of 1812. The war was over in 1814 when Alexander I and Russian army entered Paris. The same year the Russian State Council, Holy Synod, and Cabinet of Ministries awarded him the title “Alexander the Blessed”. Georgia, Finland, Poland, and Azerbaijan were absorbed into the Russian Empire. Alexander I died in Taganrog and was buried in St Peter and Paul Fortress. His unexpected death gave raise to many myths. The most popular one says that he did not die and someone else was buried in his grave. The sovereign retreated to Siberia, later resurfacing as Fedor Kuzmich (a monastic spirituals or starets) who died in a forest near Tomsk in 1864.