Nevsky prospect – the main street of the city 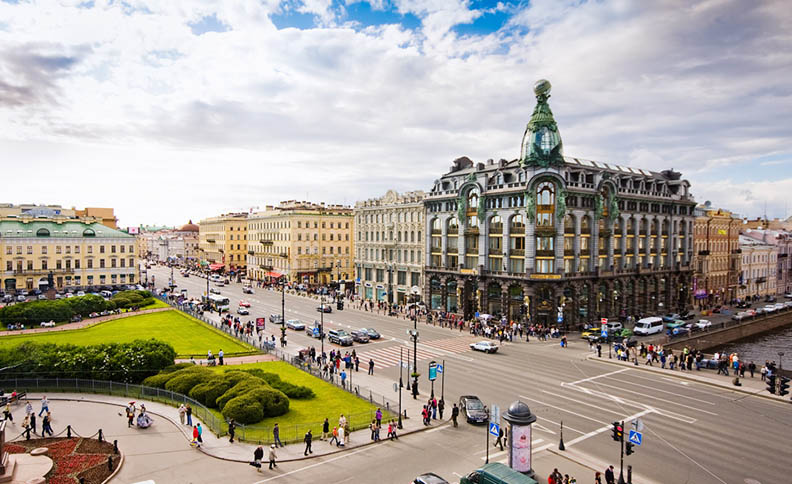 Nevsky prospect is the main thoroughfare of the city that starts from the Admiralty and ends at Alexander Nevsky Square. It is 4,5 km long. It took over two hundred years to form the ensemble of Nevsky Prospect. It appeared in 1710, as two roads in the forest leading from the Admiralty and from the Alexander Nevsky Monastery to the Old Novgorod Road. Later, it got the name of Big Perspectiva, which in the late century was renamed to Nevsky Prospect when it became the main street of the city. The word prospect comes from perspective and in this sense means a long street with a wide distant view. The avenue got its name in honor of Alexander Nevsky, the Prince of Novgorod, who defeated the Swedes in 1240 on the Neva.

When Peter the Great started building the capital he ordered to transfer the relics of Alexander Nevsky, who was canonized by the Russian Orthodox Church, from the city of Vladimir to St. Petersburg. In 1710 Peter I ordered to construct the Holy Trinity and Saint Alexander Nevsky monastery on the place where the Chernaya River (now Monastyrka) empties into the Neva. In 1724 the relics of Alexander Nevsky were transferred from Vladimir to St Petersburg. The monastery complex includes the Annunciation Church by D.Trezzini (1722), St. Theodor’s (Alexander Nevsky’s brother) Church to the design of P.Trezzini (1745-1750), the Metropolitan’s House, the Seminary and the Host Blocks constructed by Rastorguyev (1755-1771). The dominant of the monastery is the Holy Trinity Cathedral designed by Starov in Classicism (1776-1790). By the early 19th century the monastery had been turned into a leading center of education and culture in Russia with historical archives, library, and the Clerical Academy- the higher educational establishment of the Moscow Patriarchy. In 1797 the Alexander Nevsky Monastery was attributed rank of Lavra given to the monasteries held the most important position (before the revolution there were four lavras in Russia). Within the Monastery several cemeteries were formed. The oldest St. Lazarus’ Cemetery came into being as early as Peter I’s time. It is the burial place of outstanding statesmen, members of aristocratic families, scientists, and writers- M.Lomonosov and D.Fonvisin. The second one is the Tikhvinskoye Cemetery. There are graves of famous Russian poets and writers I.Karamzin, I.Krylov, V. Zhukovsky, F.Dostoyevsky; composers M.Glinka, M.Musorgsky, N.Rimsky-Korsakov, P.Chaikovsky; many prominent painters, architects, sculptors, and actors. The third cemetery is St. Nicholas’ where the first mayor of St. Petersburg A.Sobchak is buried. After the October Revolution the lavra was closed. For the last years there has started a gradual return of buildings and church utensils to the Russian Orthodox Church. 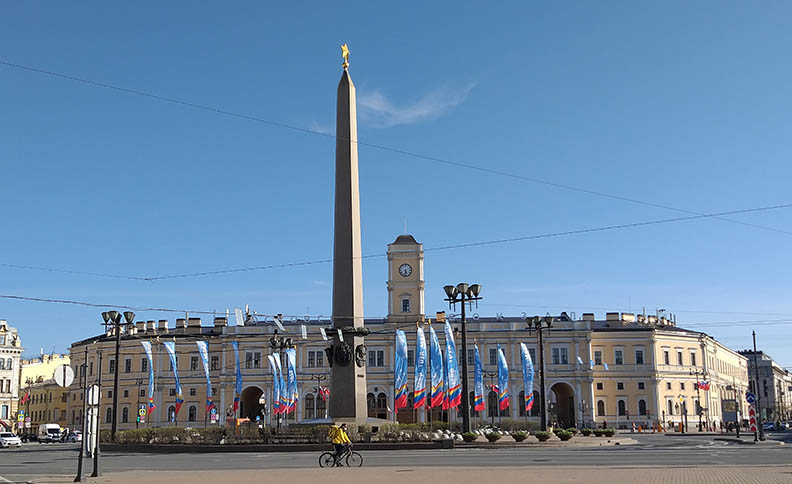 The name of the square commemorates the events of the February Revolution of 1917. The square was laid at the intersection of Nevsky Prospect and Ligovsky Prospect in front of the Moscow Railway Terminal designed by K.Thon in 1851. This was the earliest long- distance railroad between St. Petersburg and Moscow. In the centre of the square there is a granite obelisk to the Hero-City of Leningrad.   It was put up in 1985 to commemorate 40th anniversary of the victory in the Great Patriotic War. 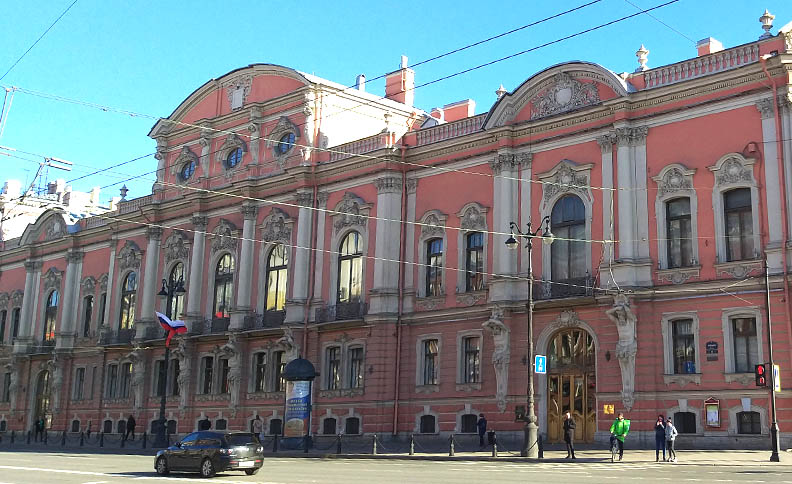 Beloselsky-Belozersky’s Palace is at the corner of Nevsky Prospect and the Fontanka River. It was built by A.Stakenschneider in 1846-1848.  At the end of the 19th century it went to Grand Duke Sergey Alexandrovich, brother of Alexander III. Now the palace houses the Municipal Cultural Centre. 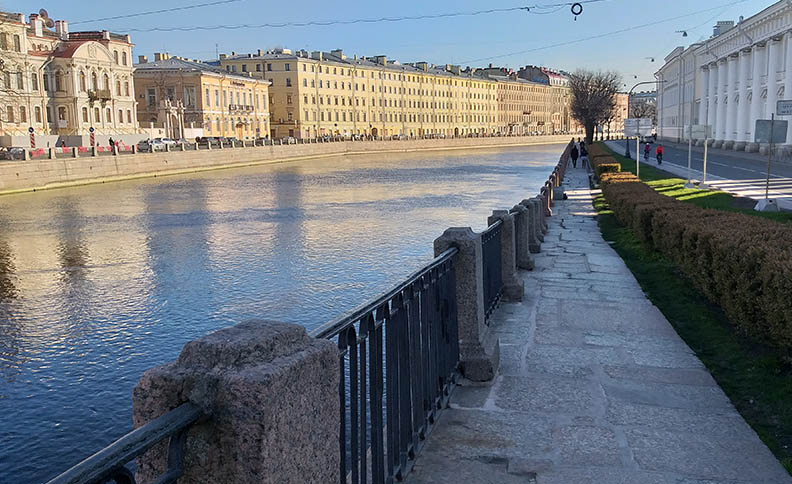 The Fountain River –Fontanka- was the boundary of the city in the 18th century. Its name goes back to the early 18th century, when the water from the river was used to feed the fountains of the Summer Garden. 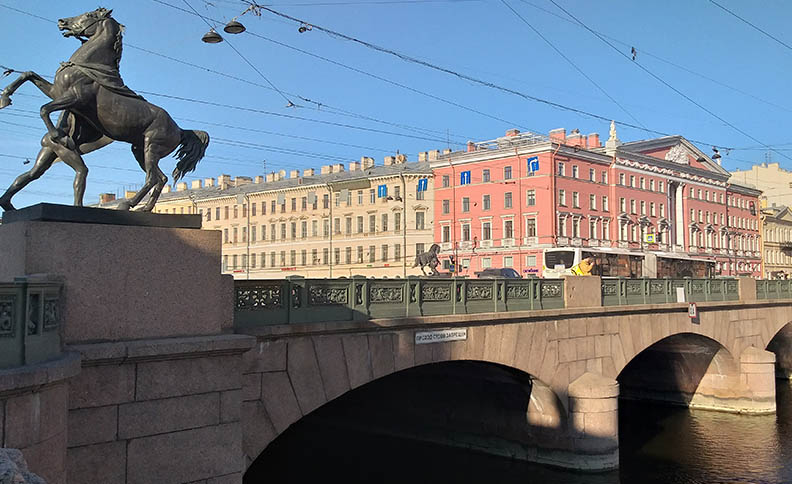 The Anichkov Bridge was built in the 18th and rebuilt in stone in 1841. The four equestrian statues made by P.Klodt in 1842-1850 were placed at the bridge corners. They represent four stages of taming a horse and symbolise man’s struggle with nature. On the bank of the Fountain River there is the Anichkov Palace, both the bridge and the palace were named after Lieutenant-Colonel M.Anichkov who supervised the construction of the first wooden bridge. 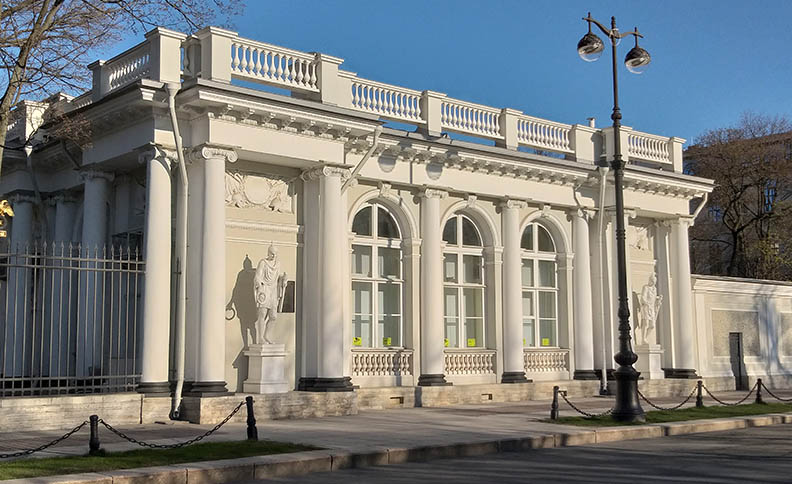 The Anichkov palace was built in 1741-1750 to the order of Empress Elizabeth for her favourite Count Razumovsky. In the later years the palace changed its owners and underwent many reconstructions. In the early 19th century the palace went to the Treasury. In 1881-1894 it became the residence of Alexander III and later of his widow Maria Fedorovna. At present it houses the Palace of Creativity for children. 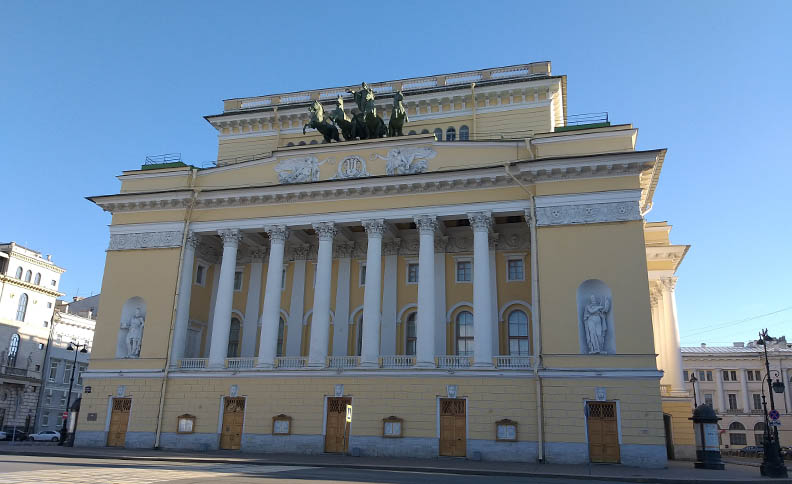 Ostrovsky Square took its final shape in the 1830s. The compositional centre is the Alexandrinsky Theatre created by architect C.Rossi. It is one of the best samples of Russian Classicism. It owes its name to Empress Alexandra Fedorovna, the wife of Nicholas I. The Alexandrinsky Drama Theatre is the oldest professional company in Russia established by Empress Elizabeth I in 1756. 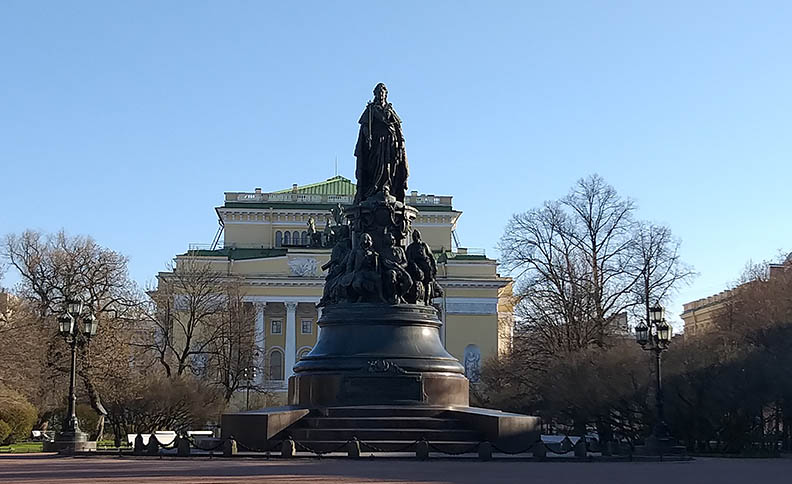 The monument to Catherine II

The monument to Catherine II was put up in front of the Alexandrinsky Theatre in 1873. The pedestal is decorated with the figures of Catherine the Great’s contemporaries, who were outstanding statesmen including A.Suvorov, G.Potemkin-Tavrichesky, A.Orlov, G. Derzhavin, E.Dashkova. 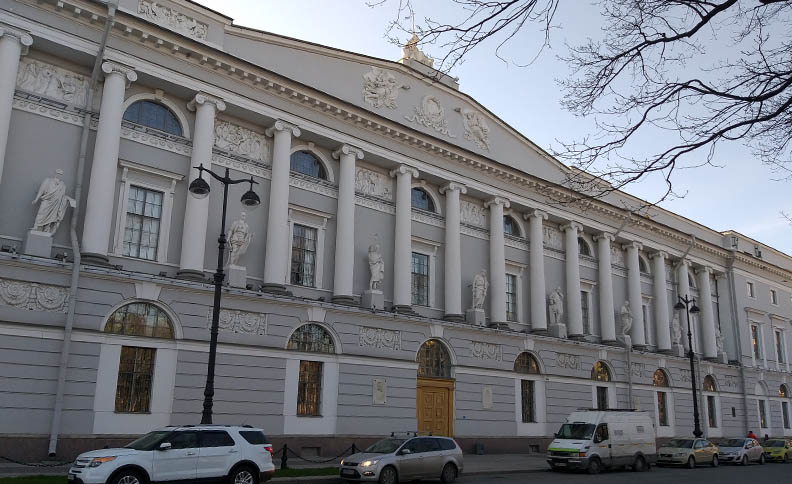 The Russian National Public Library is occupied three buildings joined together. The main building, which overlooks Nevsky Prospect, was constructed by E.Sokolov in 1796-1801.  The second one was designed by C. Rossi in 1828-1834, and the third building by Ye.Vorotilov in 1896-1901. It is the second largest library in Russia, which holds more than 28 million items. 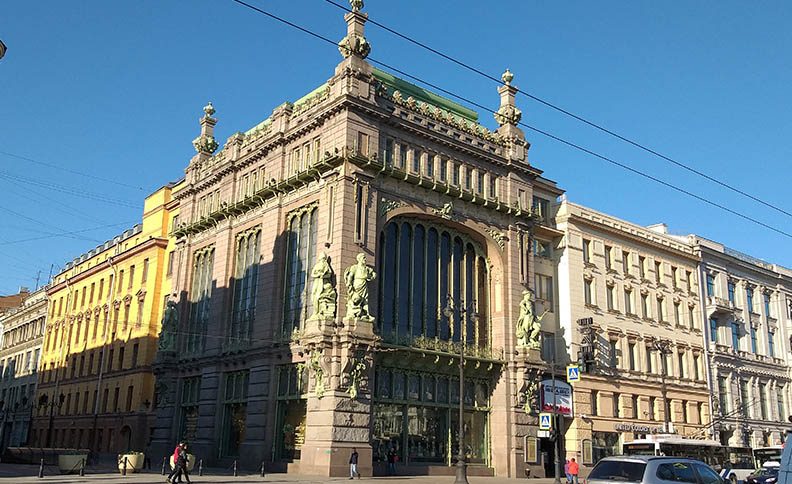 Yeliseyev’s House was commissioned by a wealthy merchant Yeliseyv in 1903. Architect G.Baranovsky designed it in the Art-Nouveau style. Now it houses the Comedy Theatre and a Food Store. 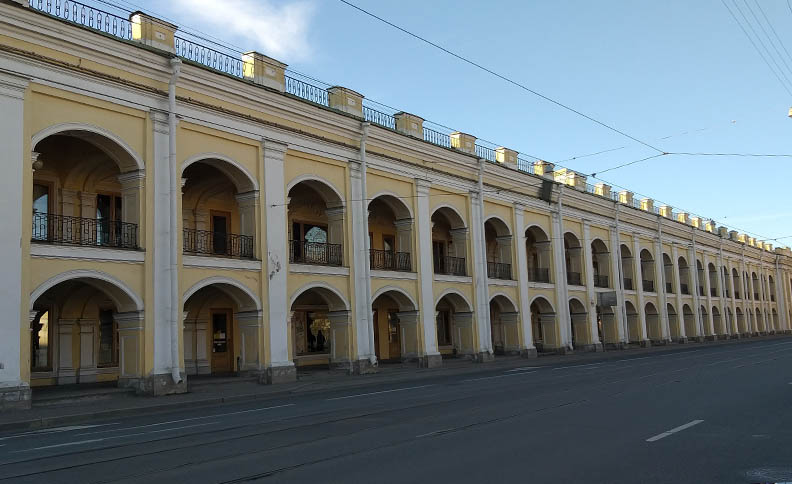 The Gostiny Dvor or Merchants’ Yard

The Gostiny Dvor or Merchants’ Yard is one of the largest and oldest department stores of the city. It was built by J.-B.Vallin de la Moth in 1761-1785.  This two-storey structure overlooks four streets and consists of numerous similar arcades with the total length of the facades over one kilometre. There were small door- size shops rented by merchants hence the name of it. This building set the model for other shopping centres in St. Petersburg and in Russia.

The Passage is another department store on Nevsky Prospect built in 1840s. The shops run along both sides of a glass-covered gallery joining two parallel streets. It used to be not only a fashionable place for shopping, but also for entertainment. There was a confectionary, coffee-shops, museums, concert hall. The latter one became the Drama Theatre named after V.Komissarzhevskaya.

In the second half of the 18th century more non-Orthodox churches were raised. It was connected with the growth of the foreigners came to St. Petersburg on various purposes. Many of them built houses, bought property and founded industrial and trade companies.

St. Catherine’s Armenian Church was built by Y.Velten in 1780 on the donation of a wealthy Armenian businessman Ioakim Lazarev. Closed in 1930, the building has now been returned to the Armenian community.

St.Catherine’s Roman Catholic Church was designed in 1762-1782 by J.-B.Vallin de la Moth and A. Rinaldi. Now this church is an active one.

The Grand Hotel Europe is one of the most famous Russian hotels built by L.Fontana in 1873-1875. In 1908-1914 it was considerably altered by architect F.Lidval in the Art-Nouveau style.

The Small Hall of Philharmonic Society has always been the centre of the city musical life. It was constructed in 1830 by architect P.Jacquot for V.Engelhardt, a rich patron of arts. Here Glinka, Wagner, Liszt, Rubinstein performed.

Many waterways had been built since the foundation of the city. The Ekaterininskii Canal –modern Griboedov Canal– was made in 1739 to drain the swamp at the Moika riverhead. 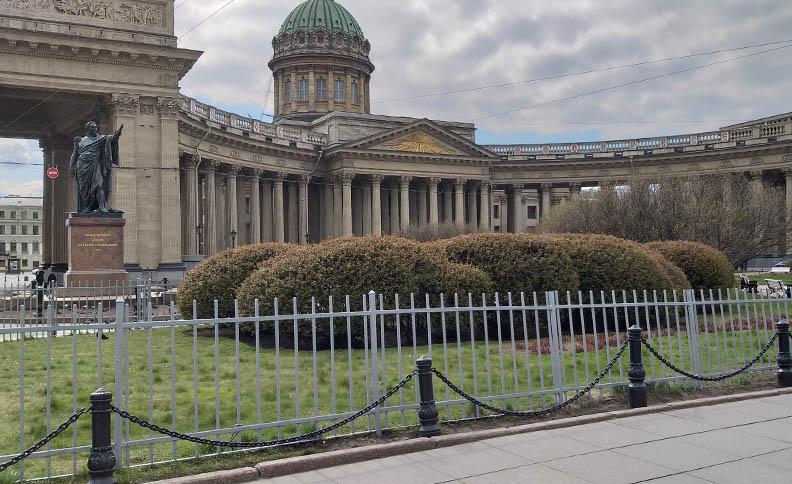 The Cathedral of Our Lady of Kazan

The Cathedral of Our Lady of Kazan was built in 1801-1811 by V.Voronikhin. It is an outstanding example of the Russian classical architecture. The cathedral was put up on the spot of a small wooden church to accommodate the ancient miracle-working icon of Godmother of Kazan, which was the family icon of the Romanovs. The best artists participated in the decoration of the cathedral, sculptors I.Martos, I.Prokofiev, painters O.Kiprensky, V.Borovikovsky, A.Ivanov. Although the cathedral was finished before the Patriotic War of 1812, it became the War Memorial devoted to the Russian military glory. The captured enemy banners and keys of the French cities are kept inside the cathedral. It was here the remains of the Field- Marshal M.Kutuzov were brought in 1813. Now the Cathedral is the principle Russian Orthodox Church in St. Petersburg. In front of the cathedral there are two monuments to Field-Marshals M.Kutuzov and Barclay de Tolly. 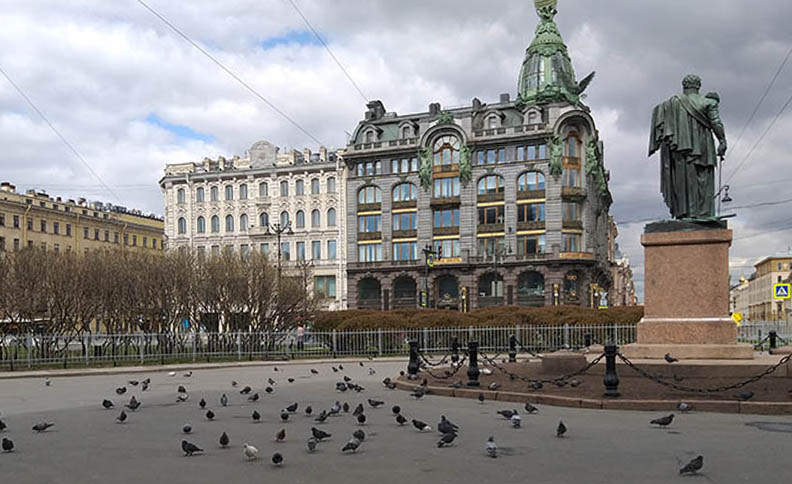 Dom Knigi or the House of Books

Dom Knigi or the House of Books originally was constructed for the Singer Sewing Machine Company by architect P. Suzor in 1902-1904. It was the first fireproof building in the city made of stone, metal, and glass. The Company planned to put an eleven-floor skyscraper but the city administration rejected the project relayed on the law regulating the height of buildings in the city.

The Lutheran Church of St. Peter and Paul was built by architect A. Bruillov in 1830s for the German community of St. Petersburg. Nowadays the church is active.

The Moika was the city’s southern boundary till 1709. The earliest houses put on the riverbanks in 1705 were small wooden dwellings of naval officers and shipbuilders who worked at the nearby shipyard. Later many mansions of wealthy citizens were erected along the Moika.

The Stroganov Palace was designed in 1752-1754 by B. Rastrelli in Russian Baroque style for Count Sergey Stroganov. It is located at the crossing of Nevsky Prospect and the Moika River embankment. The Stroganovs belonged to the richest and the most powerful families of Russia before 1917. They accumulated enormous wealth because of their monopoly on salt.  Now the building is the branch of the State   Russian Museum. 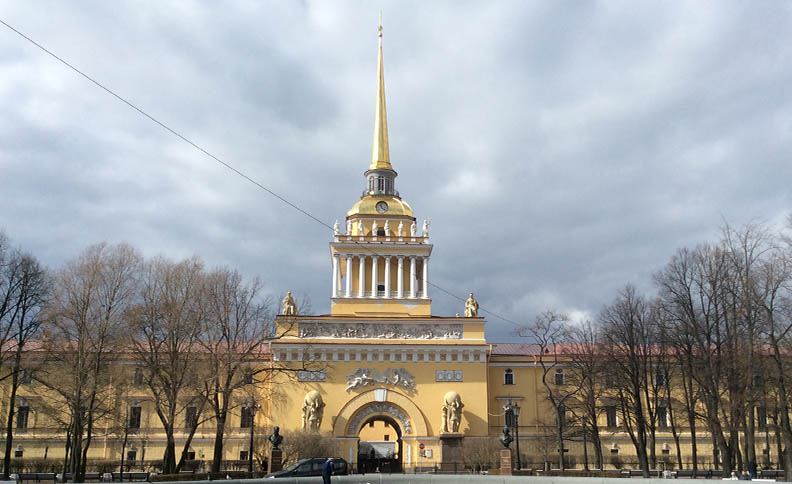 The Admiralty is an outstanding sample of Russian classical architecture of the 19th century. The building of the Admiralty is the compositional centre of St. Petersburg. Three main avenues of the city- Nevsky Prospect, Voznesensky Prospect, and Gorokhovaya Street- converge here. The first Admiralty was founded in 1704, as a shipbuilding yard by the order of Peter I. To his design, the building was in a shape of a broad letter U with its two wings overlooking the Neva. The yard was used for the construction of sailing vessels. There were also warehouses, workshops, different admiralty departments. Originally the Admiralty complex was wooden and in 1730s rebuilt in stone. In 1806-1823 the new Admiralty was erected by the Russian architect A.Zakharov. The tower in the central part of the building is decorated with a slim golden spire. On its top there is the weather vane in the shape of a sail boat that has become the symbol of the city. Shipbuilding in the Admiralty went on till 1844. Since 1925 the Admiralty houses the High Naval Engineering Academy.

Visit the grand location Nevsky Prospect  and many more that St Petersburg has to offer!
Contact us@ Russian InfoCenter to Book Classic Russia tour 5n/6d and more tour packages from India to Russia
Choose from flights ex Delhi, Mumbai & Calcutta