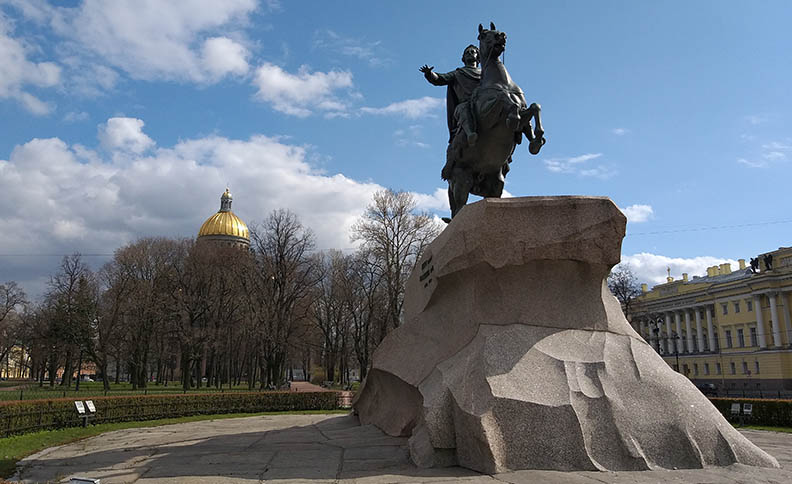 The Bronze Horseman, it would be impossible to imagine St. Petersburg without this work of art. The bronze horseman has a huge history, because it was built in honor of Peter I – the founder of Saint Petersburg. This is one of the most famous sights of the Northern capital, the image of which can be found on postcards and stamps, envelopes and tourist guides. The silhouette of the bronze giant (it got its name “the Copper horseman” due to the work of the same name by Alexander Pushkin) is so recognizable that it is associated exclusively with the city on the Neva.

The sculpture appeared on this site more than two hundred years ago, but the interest in it is so lively and enduring, as if the legendary state figure embodied in this creation has recently become a part of our history. However, this is not surprising: modern Russia is experiencing such a rise and at the same time faces such global challenges that many people often compare the present time with the Peter’s era. The Bronze horseman also has its own history-full of events and facts, myths and legends. The initiative to create a monument to Peter I belongs to Catherine II (Empress of Russia. 1729 – 1796). It was on her orders that Prince Alexander Mikhailovich Golitsyn (Russian envoy to great Britain. 1723-1807g.) turned to the professors of the Paris Academy of painting and sculpture Diderot (French writer. 1713 – 1784) and Voltaire (French philosopher. 1694-1778), whose opinion Catherine II fully trusted. Famous masters recommended for this work Etienne-Maurice Falcone (French sculptor. One thousand seven hundred sixteen – 1791), who worked at that time as the chief sculptor at the porcelain factory. The statue of Peter the great, to pacify the horse on a steep cliff top, beautifully conveys the unity of rest and motion; the particular greatness of the monument give regally proud position of the king, commanding gesture of the hand, rotate his head in a Laurel wreath, embodying the resistance elements and the assertion of the sovereign will. The monumental statue of a horseman with an imperious hand clutching the reins of a rearing horse in a rapid rush symbolizes the growth of Russia’s power. The statue of a rearing horse surprises with the created balance. You might think that his figure is supported only on his hind legs. In fact, some tricks were used to give stability to the sculptural composition. In order not to disrupt the image of a rapid take-off of a rearing horse, a flexible snake was chosen to weigh it down with a massive support structure. In the curve of her body, pinned down by hooves, as if accidentally touching the horse’s tail. Connected to it, it thus gives stability and balance to the entire monument.

Another interesting element of Peter’s appearance is the pupils. It is as if he is looking at the city, laid out by him, with a loving gaze: his pupils are of an unusual shape, in the form of hearts. The location of the monument to Peter I on the Senate square was not chosen by chance. Nearby are the Admiralty, founded by the Emperor, and the building of the main legislative body of tsarist Russia — the Senate. Catherine II insisted on placing the monument in the center of the Senate square. The author of the sculpture, Etienne Falcone, did his own thing by placing the monument closer to the Neva. Thanks to Alexander Pushkin (Russian poet. 1799 – 1837), who used a fantastic story about the revived monument during the flood that shook the city in his poem, the bronze monument of Peter in 1833 became known as “the Bronze horseman”. The monument to Peter I is an integral part of the ensemble of the city center. On city Day in Saint Petersburg, official celebrations traditionally begin with the laying of flowers to the “Bronze horseman” on the Senate square.

Visit the grand locations The Bronze Horseman  and many more that St Petersburg has to offer!
Contact us@ Russian InfoCenter to Book Classic Russia tour 5n/6d and more tour packages from India to Russia
Choose from flights ex Delhi, Mumbai & Calcutta