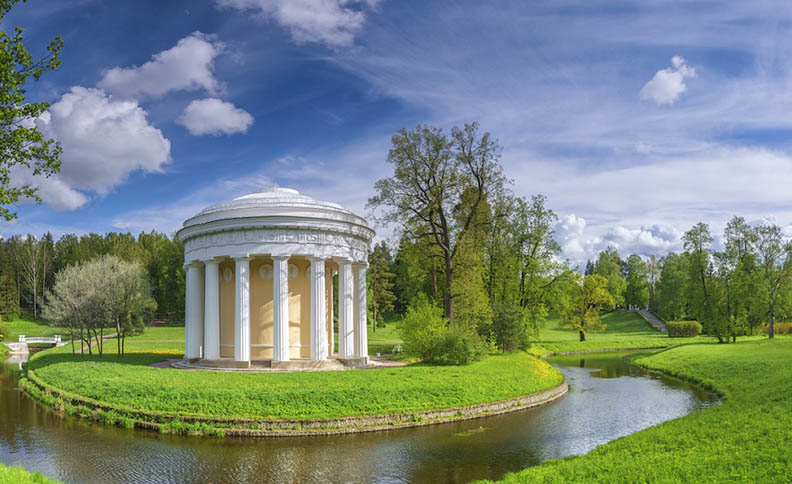 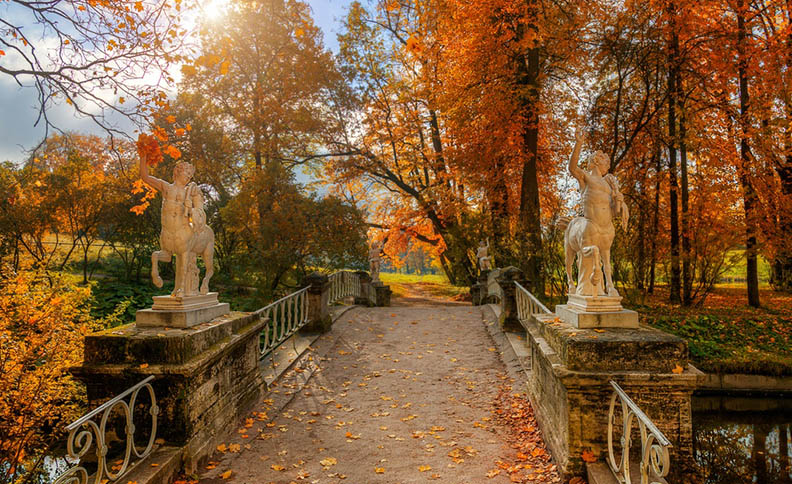 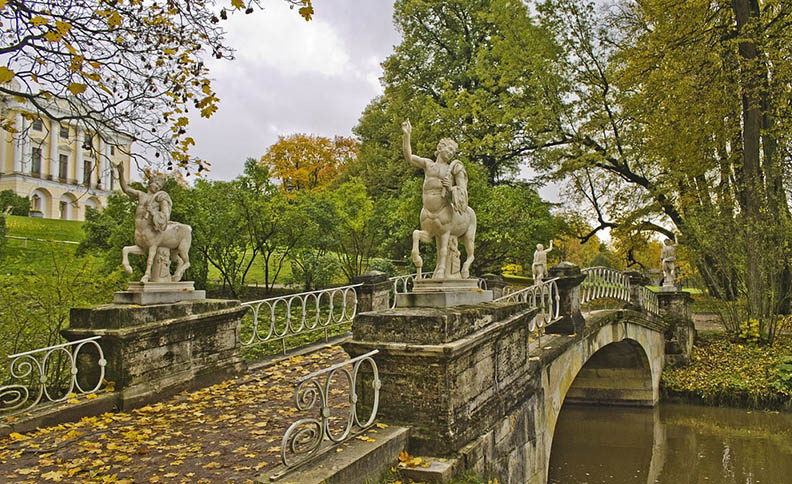 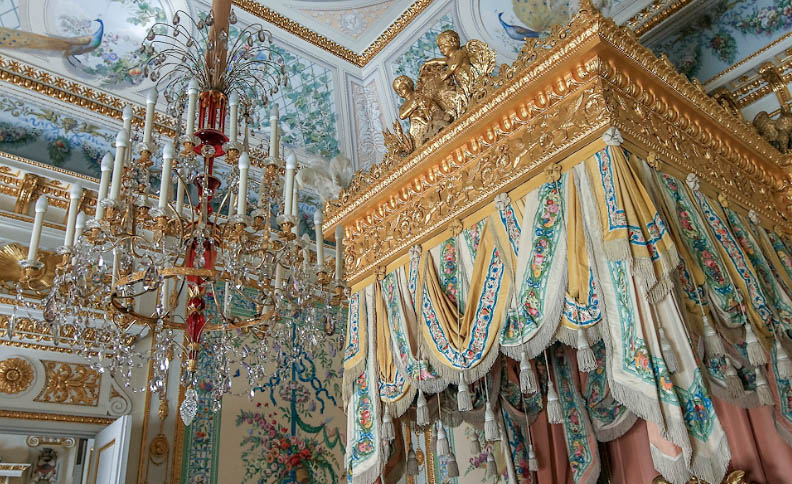 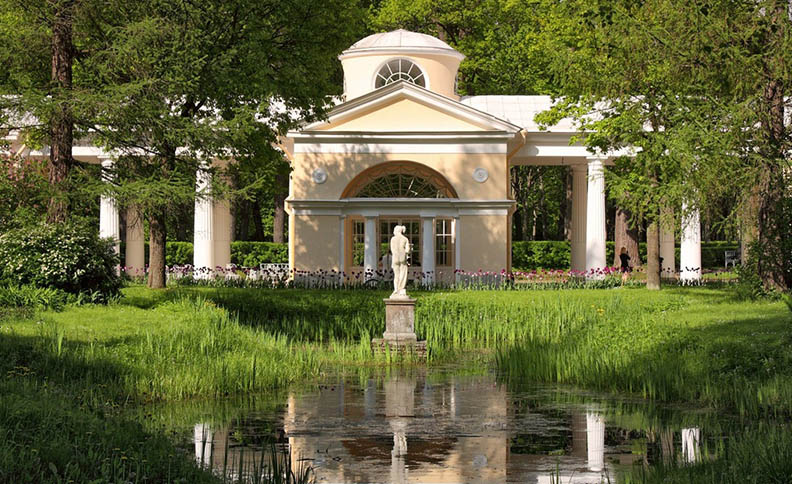 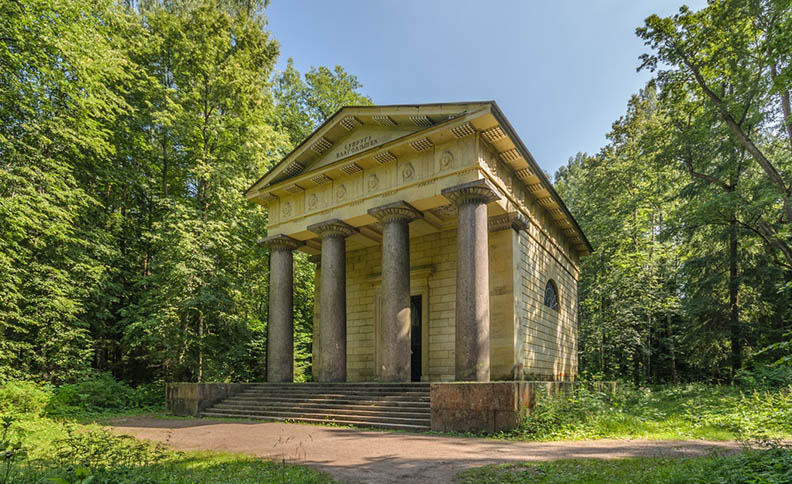 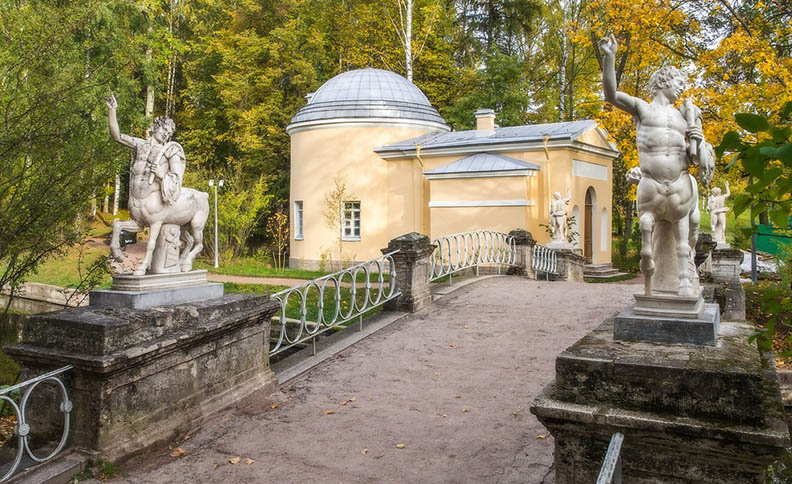 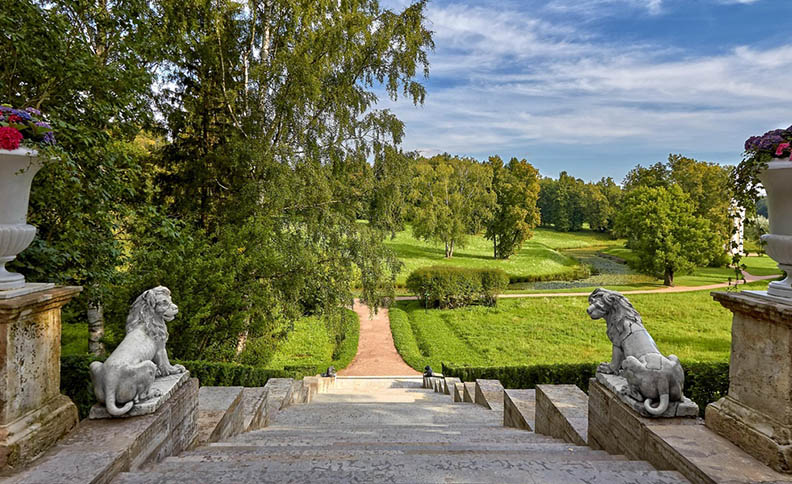 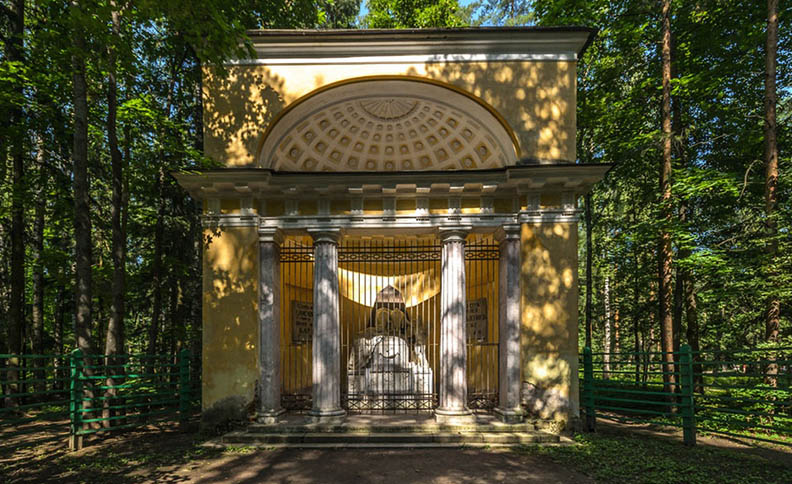 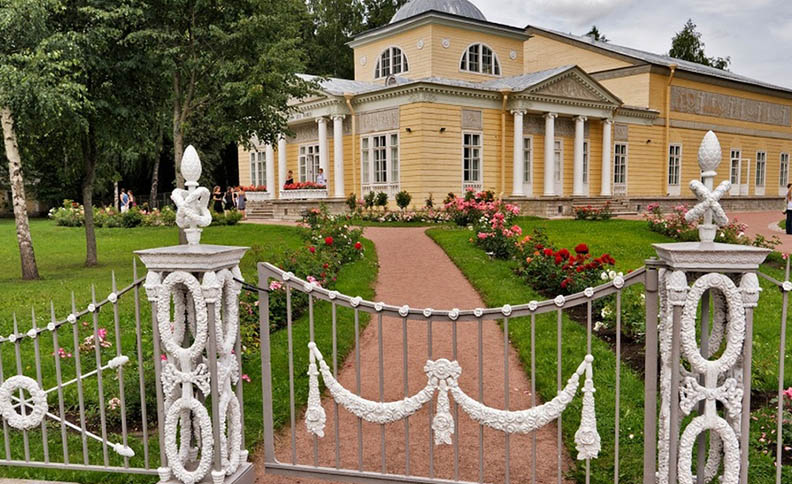 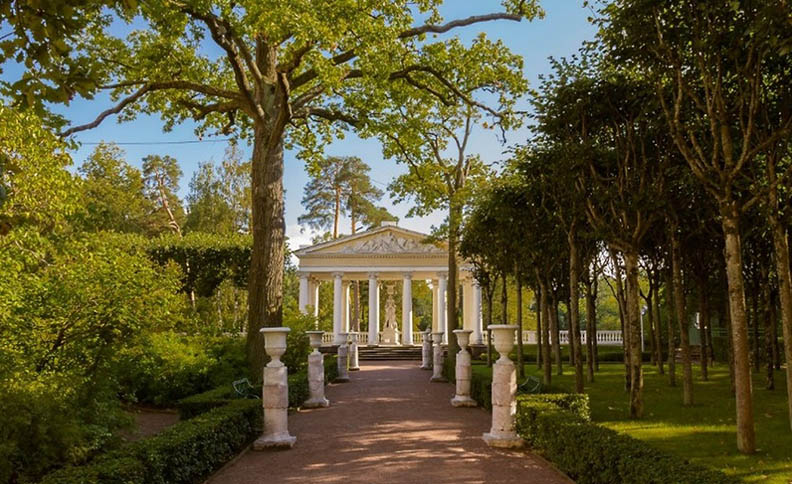 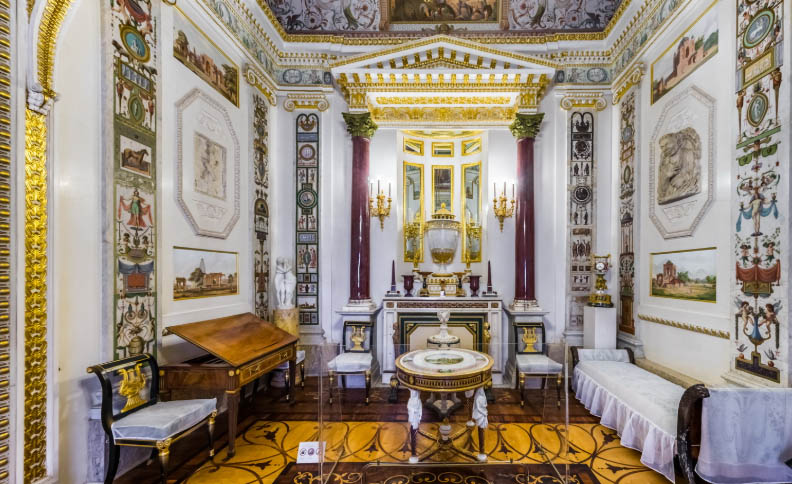 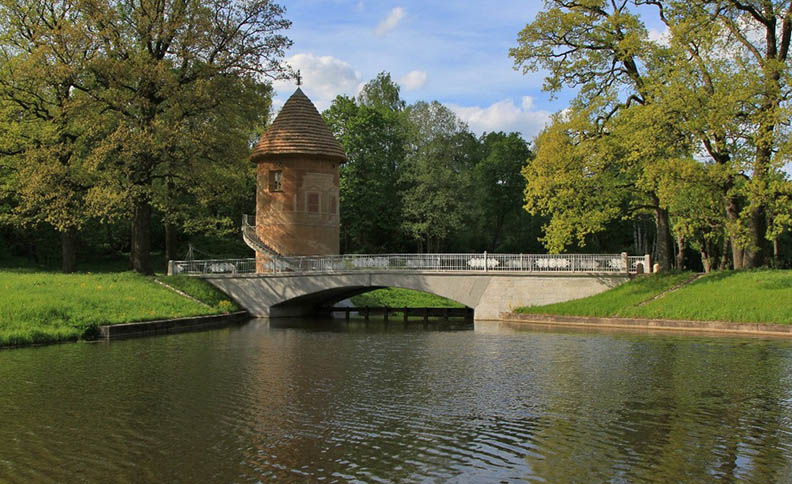 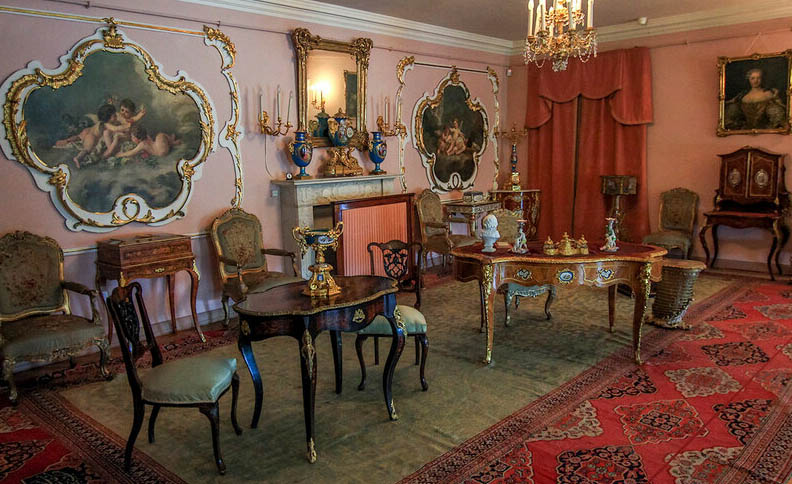 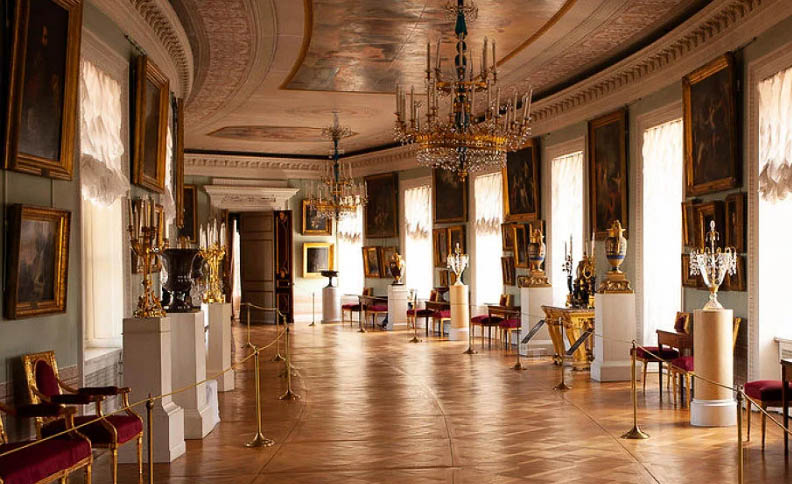 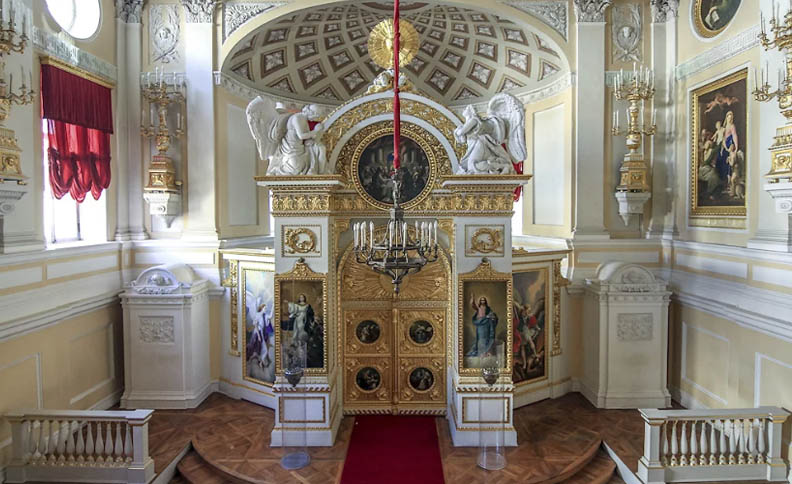 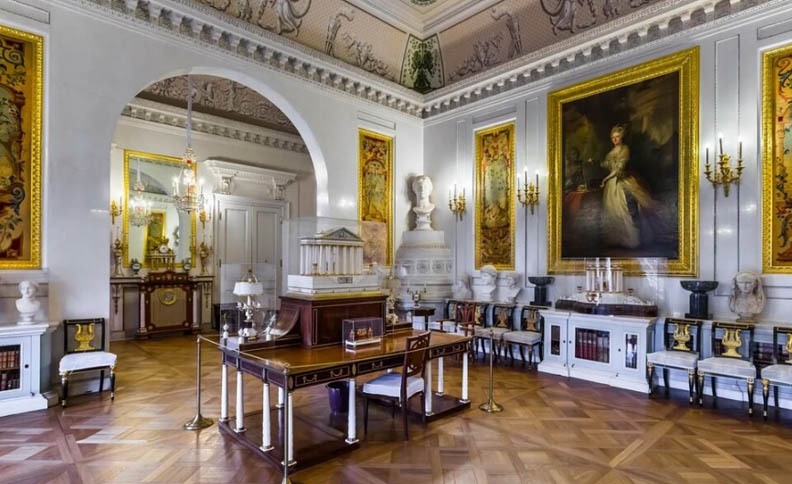 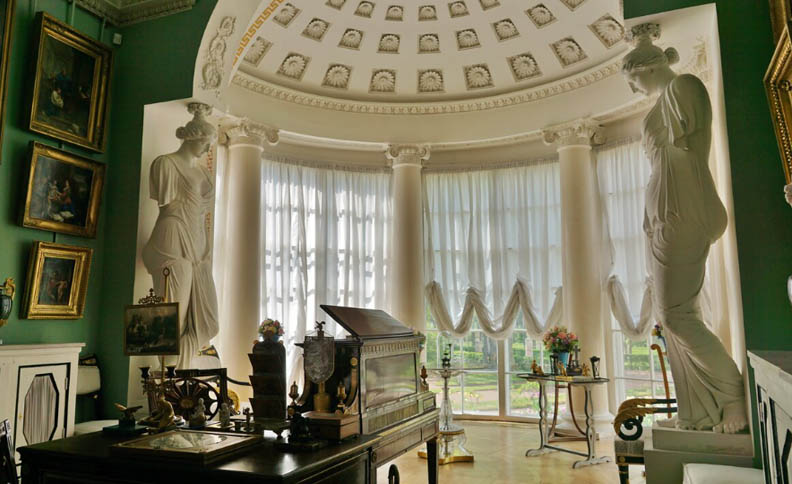 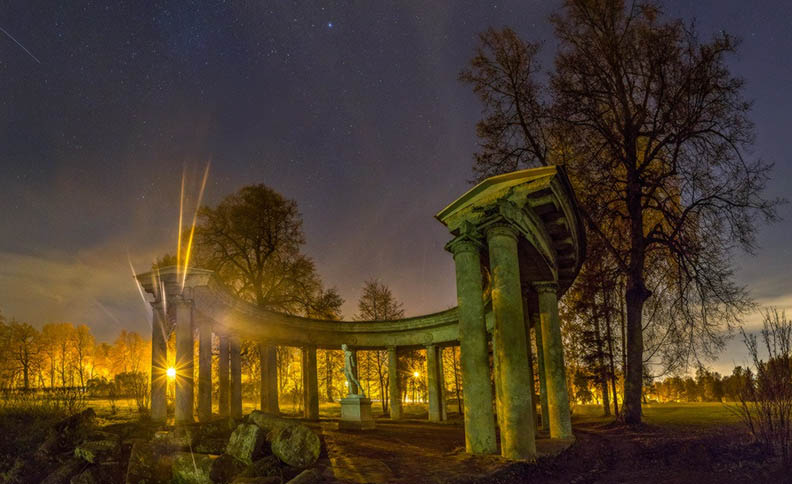 Pavlovsk is one of the former royal summer residences situated 32 kilometers south of Saint Petersburg. Catherine II presented her son Paul one thousand acres of land and two villages with peasants. This was the site of hunting territory lying along the bank of the river Slavyanka, seven kilometers from Catherine’s Imperial residence- Tsarskoe Selo. The reason for this generous gift was the birth of her grandson Alexander in 1777. In 1782 an obelisk was put up on the right bank of the Slavyanka to commemorate the foundation of Pavlovsk. The inscription on the iron plate states: The construction of Pavlovskoye was started in 1777. Paul ascended the throne in 1796 and Pavlovsk was turned into the official residence. In 1798 the Emperor became Grand Master of the Maltese Order and the palace became the place for meetings and festivities of the knights and other officials of the order. After Paul I’s death in 1801 the residence belonged to his widow Maria Fedorovna, who gave forty years of her life for Pavlovsk which became the greatest creation of this remarkable woman. After her death in 1828, the residence passed to the youngest son of Paul and Maria Fedorovna, Grand Duke Michail Pavlovich. The most important event that happened under him was the lying of the railway line to Pavlovsk and the construction of the Musical Station. Many celebrated singers and composers, both Russian and foreign, performed here. Thus the outstanding Austrian composer Strauss conducted an orchestra there for a few seasons. Many contemporaries considered the Musical Railway Station the first Russian Philharmonic Hall. Pavlovsk was a private property of the royal family until the October Revolution of 1917, when it was turned into a museum. From September 1941 Pavlovsk was under the Nazi occupation. Many exhibits had been evacuated or hidden before Hitler’s army entered the town. The palace building was totally destroyed and only bare walls were left standing, garden pavilions and park were badly damaged. After the liberation of Pavlovsk in spring 1944 the restoration began. At present the visitors can see the former state rooms of the royal family on the second floor, their private living rooms on the first floor, and the exhibition of The Russian 19th Century Interior on the third floor.

The construction of the stone palace started in 1782 by Charles Cameron, who was one of the favorite architects of Catherine II. He was the great admirer of ancient architecture and works of the Italian architect of the 16th century Andrea Palladio. Based on these ideas, Cameron designed an Italian villa on the top of a natural hill in the river valley. The architect planned a modest three-storey building crowned with a flat cupola. Adjacent to the central building were semi-circular galleries which formed a wide parade ground. The interior decoration was supposed to be according to the fashion of that time. It has been preserved on the first floor- the Egyptian Vestibule, the White Dining Room, the Billiards Room, and the Old Drawing Room. In 1796 Paul I became the Emperor and architect Cameron was dismissed. V.Brenna was invited to complete the works and turned this country estate into the official Imperial residence. Brenna extended the palace and galleries, added the southern wing to accommodate the Church and the Throne Room, and decorated the interiors of the 2nd floor. In the early 19th century architect G.Quarenghi worked in the palace and created the Corner Drawing Room, some interiors for Maria Fedorovna on the 1st floor.  After the fire of 1803 architect A. Voronokhin took charge of the reconstruction of the palace. In 1822-24 architect C.Rossi participated in the interior decoration of the palace and added the wing for the Grand Palace Library.

The palace possesses a unique and comprehensive collection of furniture, bronzes, fabrics, glass, porcelain, paintings, and tapestries. Many of these priceless items were brought from Paul’s and Maria’s journey to Western Europe in 1781. The Empress was noted for her exceptional talent for handicrafts. She embroidered, drew, and carved in stone and ivory. To this day the halls of the palace contain many works made by her hands. The Pavlovsk Palace is famous for its collection of antiquities. The largest part of it was purchased by Catherine II and later transferred to this palace.

The monument to Paul I in front of the palace was unveiled in 1830 made by sculptor Vitali.

The Russian historian of architecture Vladimir Kurbatov wrote: “No matter how beautiful Pavlovsk Palace is, no matter how precious its collections, it cannot be compared to Pavlovsk Park.” It has enjoyed   the fame as one of the finest landscape parks in Europe covering an area of more than 600 hectares. It was laid out in 1780 to the design by Charles Cameron. He created the lay-out of the park, first landscape compositions along the Slavyanka, and the buildings in the classical style- the Apollo Colonnade, the Temple of Friendship. In the 1790s architect Brenna added several geometrically planned sections decorated with sculptures. In the early 19th century architects Voronikhin, Quarenghi, and Rossi worked here. By the combination of natural environment and the architectural structures, they managed to create the amazing, well-balanced, and harmonious ensemble.

Visit the grand locations Pavlovsk  and many more that St Petersburg has to offer!
Contact us@ Russian InfoCenter to Book Classic Russia tour 5n/6d and more tour packages from India to Russia
Choose from flights ex Delhi, Mumbai & Calcutta