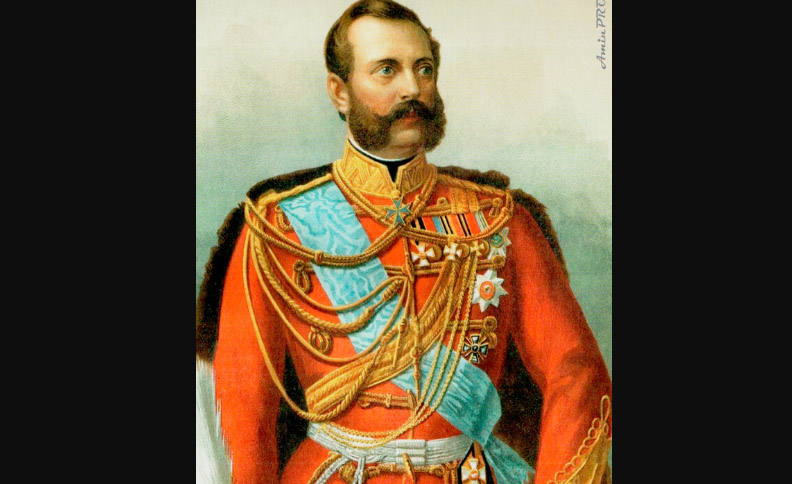 Emperor Alexander II was the eldest son of Emperor Nicholas I. He was brought up bearing in mind that one day he would inherit the Russian throne. He studied mathematics, physics, geography, history, political economy, statistics, and law and had a taste for art. He spoke four foreign languages. Alexander married Princess Maximiliane Wilhelmine Auguste Sophie Marie of Hesse-Darmstadt converted to Orthodoxy as Grand Duchess Maria Alexandrovna. They had two daughters and six sons. Alexander II initiated a lot of reforms: abolition of serfdom (1861); limitation for corporal punishment (1863); the land (1864), judicial (1864), municipal self-government (1870), military (1874) reforms. Alexander II enjoyed mixed success in international affairs. He brought the Caucasian War to an end (1864) and annexed the Amur Provinces (1858), Ussuriisk (1860), Turkestan (1867), Emirate of Bukhara (1868), and Kokand (1876). Japan recognized Russia’s right to southern Sakhalin and the Kuril Islands. On the other hand, Alaska and Aleutian Islands were given away to the United States and the Russo-Turkish War (1877-1878). The liberalization of public life led to the foundation of several terrorist organizations. Supported by public opinion, the revolutionaries declared war on the tsar. During fifteen years there were twelve attempts on his life and the last one was successful. On 1 March 1881, when Alexander II was driving along the Yekaterininsky Canal (now the Griboedov Canal), he was mortally wounded in a bomb attack and died several hours later in the Winter Palace. A church was built on the site of his murder- the Church of the Resurrection of Christ or the Church of the Saviour on Spilt Blood.