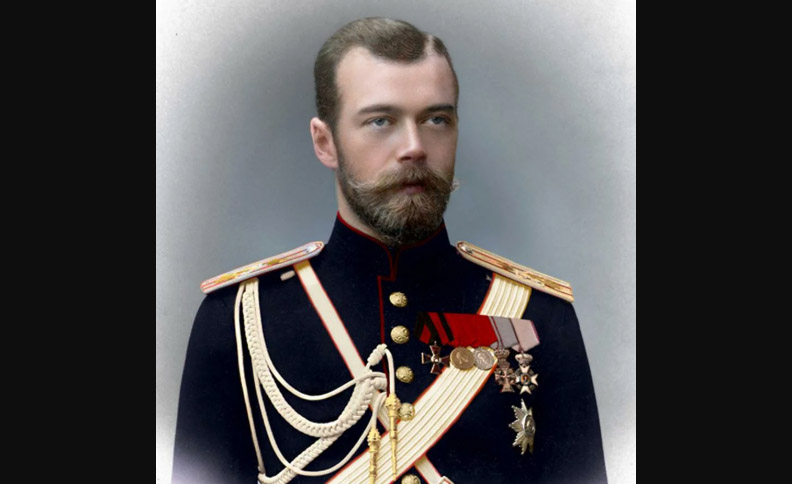 Emperor Nikolas II was the eldest son of Emperor Alexander III. Nicholas received a good education at home and took a special course of lectures from 1885 to 1890. He also served as an officer at army camps not far from St Petersburg. In 1894 Nicholas married Princess Victoria Alix Helena Louise Beatrice of Hesse-Darmstadt, who was the favourite granddaughter of Queen Victoria of Great Britain. She converted to Orthodoxy as Grand Duchess Alexandra Fedorovna. She gave birth to four daughters (Olga, Tatyana, Maria and Anastasia) and one son Alexei, who suffered from hemophilia. His reign is known with a line of bloody events, which followed his coronation in Moscow in 1896.  During the coronation celebrations 1.300 people were crushed to death, tens of thousands were injured at Khodynka Field. There was the Russo-Japanese War (1904-05), Bloody Sunday (9 January 1905), the armed uprising in Moscow (December 1905), the First Russian Revolution  (1905-07), Jewish pogroms, the shooting of striking workers at the Lena Mines (1912), and finally, the First World War (1914). All that events brought Russian Empire to deep crises. The second revolution was imminent. On 23 February 1917, workers took the streets of Petrograd, demanding bread and an end to the war and autocracy. On 27 February, the revolution started, the tsarist ministries were arrested and new organs were formed. On 2 March 1917, Emperor Nicholas II abdicated in favor of his brother Michael. The following day, Michael refused the throne, bringing the Romanov dynasty to an end.  After the Bolsheviks seized the power in October 1917, Nicholas, Alexandra and their children were sent to Ekaterinburg, where they and their servants were shot in the basement of the Ipatiev House on the night of 16/17 July 1918. In 1991, human remains were discovered not far from Ekaterinburg and later it was proved by DNA tests that they belonged to Nicholas, Alexandra, their daughters Olga Tatyana and Anastasia, Yevgeny Botkin (doctor) and three servants. On 18 July 1998, they were buried in the Catherine Chapel of the St. Peter and Paul Cathedral. On 14 August 2000, the Russian Orthodox Church canonized Nicholas II, Alexandra Fedorovna, and all their children.