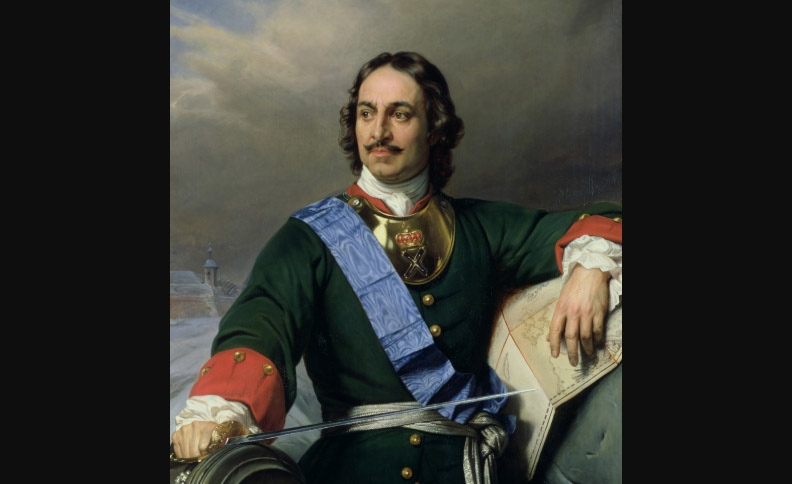 Peter I (the Great) was born in Moscow on the 30 May 1672, (12 June, new style). He was the 14th child of Tsar Alexei but the first child of Alexei’s second wife Natalia Naryshkina. When he was only 17 years old he got married his first wife Evdokia Lopukhina. According to the rules of the tsars’ life as soon as he got married he was considered of full age and could reign. Peter I had the son by his first wife, Prince Alexis (1690-1718), who was imprisoned into the Peter and Paul Fortress for taking part in the plot against his father and was tortured to death there.

Peter I was the first Russian tsar who turned Russia into the most influential European powers. Peter was called the Great not only for his height (204cm) but also for his reforms, including modernization in the spheres of production, trade and agriculture, as well as foundation of the Russian fleet and the army organization. Peter I got accesses to the Baltic and Azov seas and founded the new Russian capital of Saint Petersburg at the eastern end of the Gulf of Finland.

Being very curious and opened to everything new, having no prejudices against the foreign experience, the tsar undertook a diplomatic mission to learn more about the Western way of life and the latest technical achievements. He traveled like an ordinary man under an ordinary name, lived and worked among ordinary sergeants, learned 14 crafts, and for some time worked as a carpenter on a ship. He hired about a thousand foreigners to work in Russia and at the same time Russian noble youths were enforced to study in educational institutions in Europe.  At the same time the first university, military, medical, scientific academies and schools, the first public museum (Chamber of Curiosities) were opened in Russia. He introduced a new calendar, simplified Russian alphabet, and published the first Russian newspaper. A new form of social life was borrowed from the West – an assembly. These were social gatherings where women as well as men participated, which seemed revolutionary for that time. On assemblies new dresses and manners could be demonstrated, all developed according to the latest European trends, boyars were forced to cut their beards and get shaved regularly.

Another major reform concerned the Russian Orthodox Church. In 1721 Peter I replaced the patriarchate with the Holy Synod (Ecclesiastical body of the Church) and submitted the church.

In 1722 Peter I created the Table of Ranks that gave the promotion in the army, navy, and civil service based on personal abilities, rather than descent.

During his reign Peter I gained unlimited power in the country and was proclaimed the emperor in 1721, that’s why Russian state got the status of Empire.

In 1722 Peter I signed a decree altering the way in which the Russian throne was inherited. Instead of the crown passing from father to son, the monarch would nominate his own successor from the members of the family. Peter I had eleven children from his second wife Catherine but all sons died in infancy. On 28 January 1725, Peter I died without leaving the official heir. He was buried in the unfinished St Peter and St Paul Cathedral in St Petersburg.