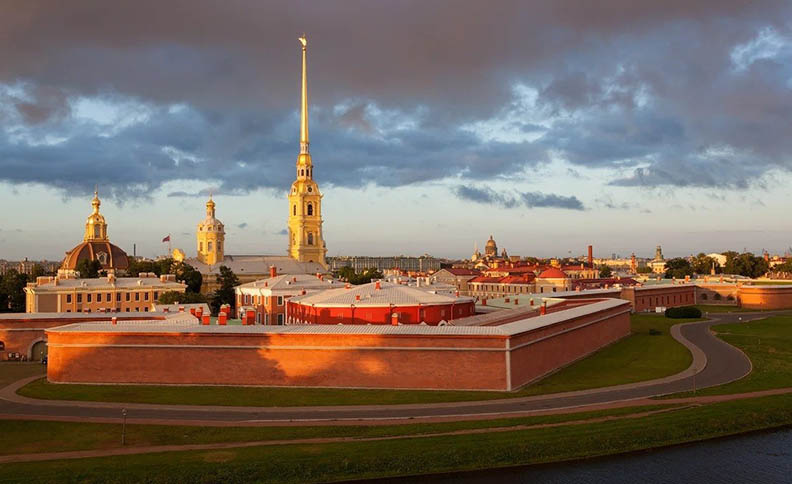 For many centuries the banks of the Neva River, as well as Ladoga and Onega lakes belonged to the Novgorod principality and were populated by the Slavs. The coast of the Gulf of Finland had always been the apple of discord because the trade routes leading to the South started around that area. Many countries fought to seize those lands. In 1617, during the time of Tsar Michail Fedorovich, it was occupied by Sweden. Russia lost the Northern territories and was cut off from the Baltic Sea. In August 1700 the young Russian tsar Peter I decided to regain the Old Russian territories and started the Northern War against Sweden, which lasted for 21 years. In May 1703 Russia gained back the territory on the coast of the Gulf of Finland and the fortress was founded on the Hare Island to protect the lands.  Its foundation date May 27 (May 16 to the Old Style) is considered to be the birthday of St. Petersburg city. The Peter and Paul Fortress was designed as an elongated hexagon, with three bastions overlooking the Neva and three others the Crownwork strait, connected by straight walls. Peter I personally supervised the construction of the bastion which was named the Tsar Bastion. Five other bastions were named after his closest associates (Menshikov, Zotov, Trubezkoi, Golovkin, and Naryshkin), who supervised the construction. At first the fortress was built of earth and wood. Later it was rebuilt in stone. 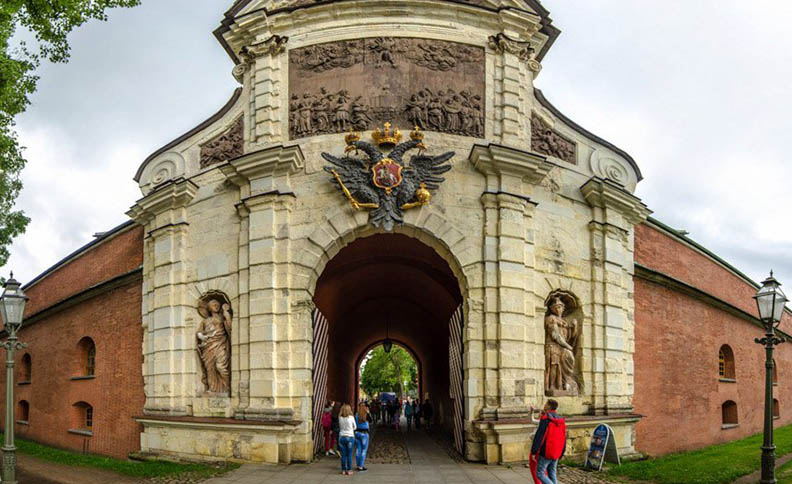 The main gate leading to the fortress is St. Peter’s Gate. It was designed by architect Domenico Trezzini in 1708. It is decorated with a bas-relief The Defeat of Simon, the Fortune-teller, which allegorically represents Russia’s victory over Sweden. Under it there is the double-headed eagle – the coat of arms of the Russian Empire. In the niches on both sides of the gate there are two statues of Bellona, the Goddess of War, and Minerva, the Goddess of Wisdom. 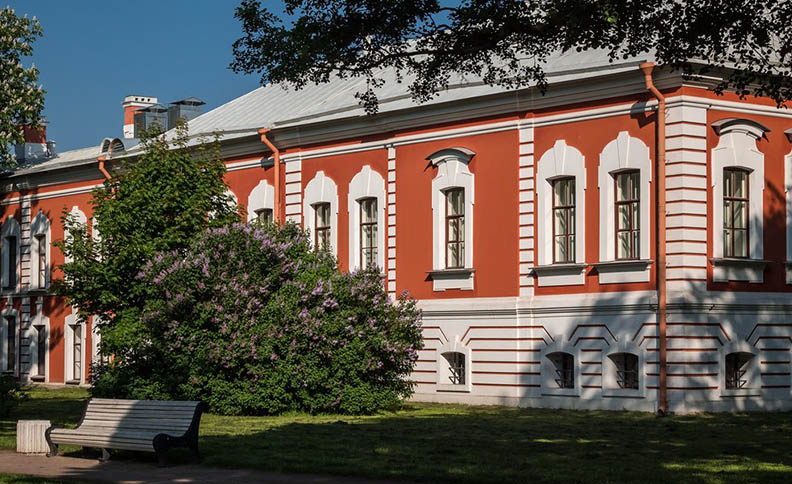 The Commandant’s House was meant for the commandant of the fortress. He was appointed by the tsar himself from among the most distinguished retired officers of high rank. It was a position of high confidence. If a commandant died on the position, he was buried in the cemetery by the wall of the cathedral.

The ground floor of the House was occupied by the commandant’s office where inquests were carried on. Nowadays the building houses the Museum of History of Saint-Petersburg. 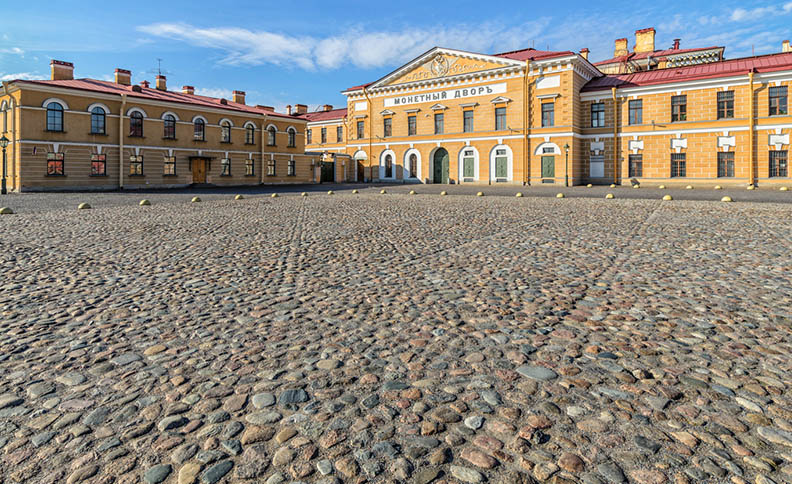 The Mint was established by Peter I in one of the bastions of the fortress in 1724. In the beginning of the 19th century a special building was constructed for the purpose (architect A.Porto). One of the most famous items made by the Mint was the tomb of Saint Alexander Nevsky. Nowadays it is a part of the Hermitage display. The Mint has never dealt with paper money. At present the Mint produces coins and medals. 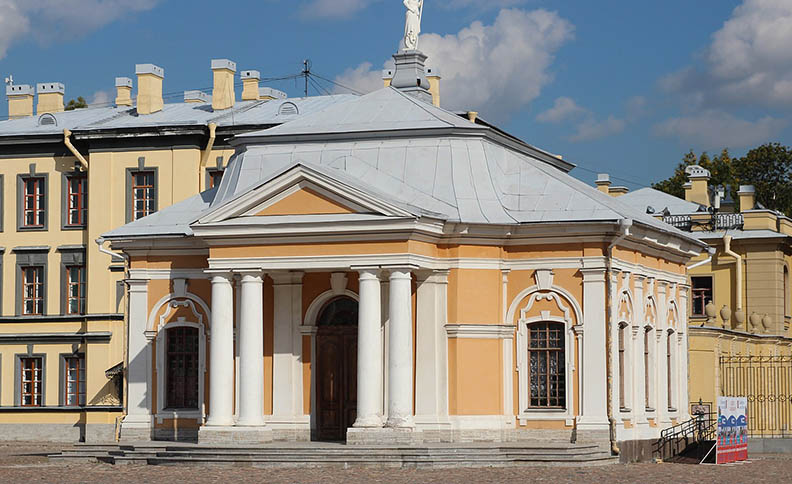 The Boat House was built in 1765 (architect A.Vist) to house a small boat which belonged to Peter I, on board of which he learned to sail in his childhood in Moscow. According to the legend the boat was made in England and was given to Peter’s father, Tsar Alexis. In 1723 a naval parade was held to celebrate the victory over Sweden in the Northern War, and Peter I ordered to bring the boat to Saint-Petersburg. The boat headed the parade and it was named the Grandfather of the Russian Fleet. Nowadays it is exhibited in the Central Naval Museum. 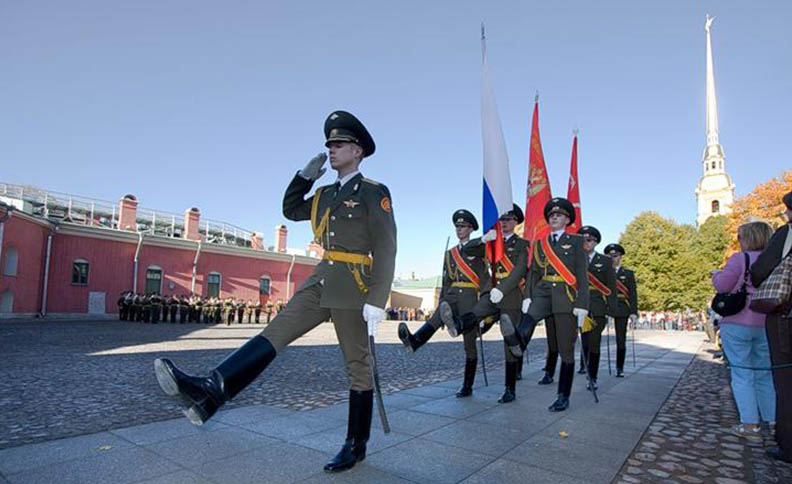 The Guard’s House was the place where the officers of the garrison served their penalties for violating the rules of the fortress. 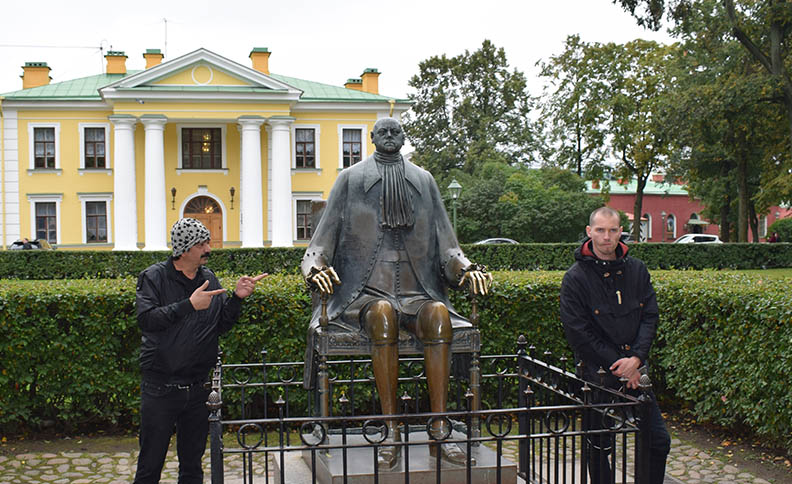 The Monument to Peter I was made by sculptor Shemyakin and installed in the fortress in 1990.

The Neva Gate is the only one which faces the river. Allegedly the prisoners sentenced to death were taken out of the fortress to the place of execution, so it was named as the Gate of Death. 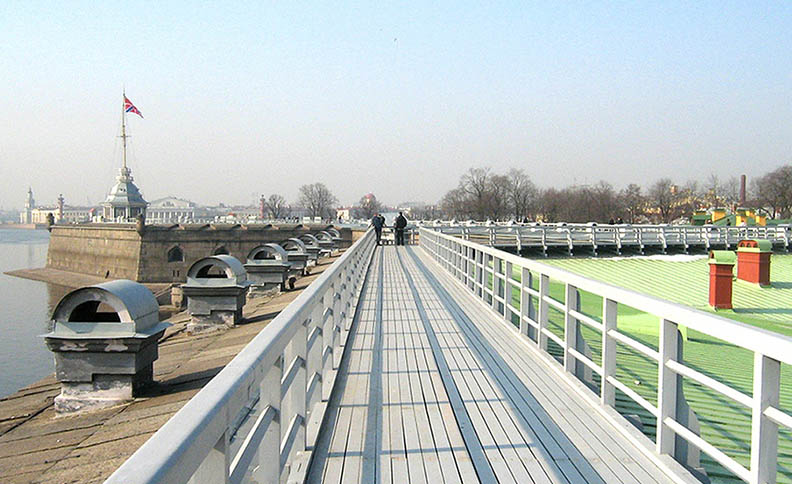 On the Naryshkin Bastion Wall there are two cannons, which give a blank shot at midday to indicate exact time.

Grand Dukes’ Burial Vault was added to the cathedral in the beginning of the 20th century (architect D.Grimm, 1896-1908). Its architectural style was made to match the early 18th-century architecture of the cathedral. There are 13 burials made in the early 20th century, and some recent burials of the members of the Romanov family who died abroad. 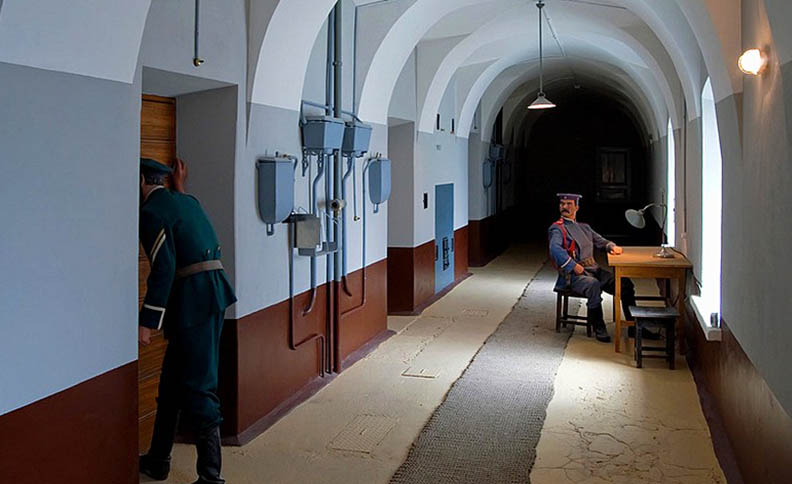 Built as a military fortification, the Peter and Paul Fortress was never called upon to use its military duty and was turned into political prison and became one the worst political jails of Russia. The first prisoner in the fortress was the son of Peter I Prince Alexis who, on his father’s order, was tortured to death in 1718 for the opposition to Peter’s reforms. Among the prisoners of the fort was a prominent writer Radischev imprisoned in the fortress in 1790 by the order of Catherine II for his book Journey from Saint-Petersburg to Moscow where he exposed serfdom and autocracy. At first he was sentenced to death, but later he was sent to exile to Siberia.  Many nobles, who opposed the political regime in Russia, were put here in the so called Secret House (in the Alexeevsky ravelin) in which the Decembrists were jailed after the Uprising in 1825. Later, in 1849 the world-famous writer F.Dostoevsky was imprisoned in St. Peter and Paul’s along with the other members of a literary society. After spending eight months in prison they were all sentenced to death. The last moment the death sentence was commuted to hard works in Siberia. Russian Democrats of the 19th century Pissarev and later Chernyshevsky were the prisoners of the fortress. The novel What is to be done was written in one of the cells. This movement for democratic changes was a failure. The despair led them to terrorism. The 1870ies saw a number of groups whose political platform was terrorism. Lenin’s brother, Alexander Ulianov was a prisoner of St. Peter and Paul’s. He was a member of People’s Will which turned out to be the first revolutionary organization in Russia. He was executed in 1887 for an attempt on Alexander III’s life. In 1872, a new two-stored prison was built in the Trubezkoi Bastion with 69 cells for solitary confinement and 2 punishment cells.

Among other prisoners of the fortress was Andrei Zhelyabov (member of the People’s Will organization), Russian proletarian writer Maxim Gorky, Bolshevik Leon Trotsky. On 26 October 1917 after the storm of the Winter Palace and arrest of the Ministers of the Provisional Government they were escorted to St. Peter and Paul’s. The last prisoners of the fortress were Grand Dukes of the Romanov dynasty who were later executed.

The St. Peter and Paul’s Fortress became a museum in 1924. 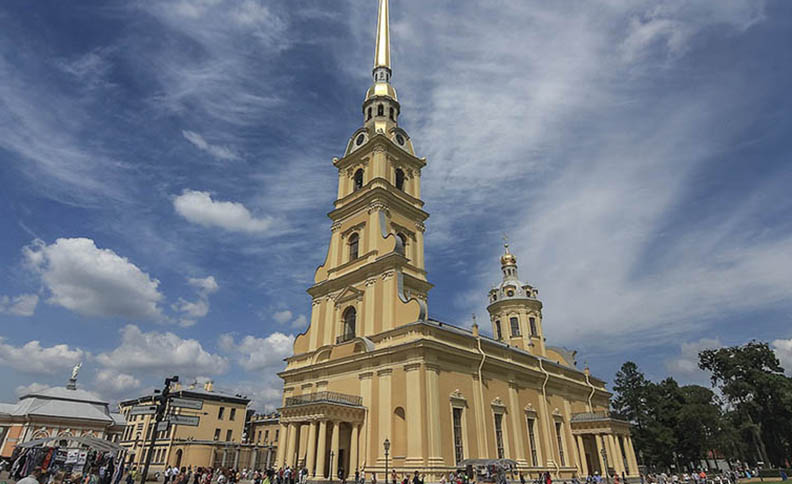 The Saints Peter and Paul Cathedral is a unique architectural monument designed by Domenico Trezzini in the style known as Peter’s Baroque. It was developed in St. Petersburg in the first quarter of the 18th century. Very simple, elegant exterior practically without decorations and, on the contrary, the interior was elaborately designed. The construction lasted from 1712 till 1732, in 1733 it was consecrated. The Cathedral is 122.5 meters high and it is one of the tallest buildings in the city. The gilded spire is crowned with a ball, on top of which there is a figure of an angel holding a cross (the wing span is 3.8 meters). On the bell-tower there is a tower clock with chimes.  Read More >>

Visit the grand locations Peter and Paul Fortress and many more that St Petersburg has to offer!
Contact us@ Russian InfoCenter to Book Classic Russia tour 5n/6d and more tour packages from India to Russia
Choose from flights ex Delhi, Mumbai & Calcutta