House Of The Merchant Guild Of Holy Spirit (Vyborg) 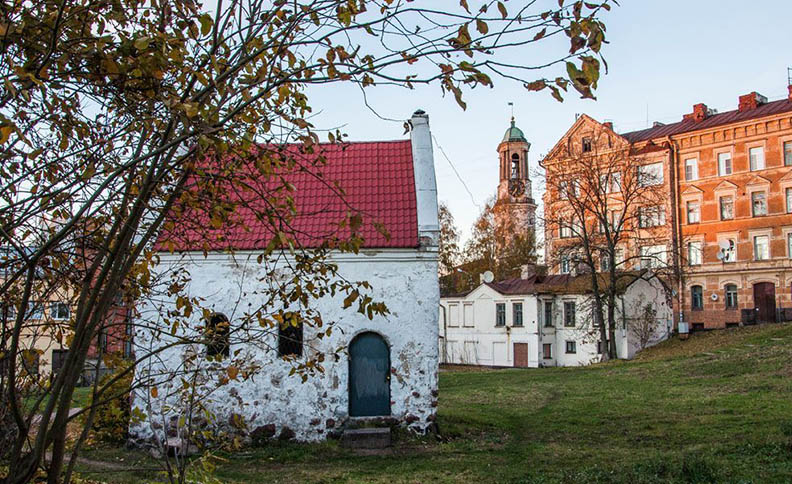 Do you know a building that was built on the model of ancient Greek architecture, located on the territory of Russia? A building that survived several wars and was both a simple barn and a significant trading point of the then Vyborg? If not, this article will show you why you should visit the House of the Merchant Guild of the Holy Spirit.

The house of the merchant guild of the Holy Spirit is the oldest stony building in Vyborg of all, built from natural malfit. This inconspicuous old building is located on Luostarinkatu (nowadays Vyborgskaya), but it also stands at an angle to the streets of Vyborgskaya and Novaya Zastava.

The historically correct date of the creation of the house is again unknown, but archaeologists believe that the House was built around the 14th century. It is also possible that the House was part of some kind of medieval merchant estate. This building is considered the oldest surviving house in Vyborg. Both before and after its redevelopment by Catherine in 1638 – 1640, the House was located in the corner of the plot, surrounded by other inconspicuous buildings. A small house – a square with white walls folded from uncouth boulders, together with a similar manor house of a burgher, a house of a city dweller and another guild house, is one of the four medieval burgher houses – small private “fortresses” of the 14th-17th centuries that can be seen in Russia only in Vyborg.

This building stands out even among the historical places of this city. Not very original architecture but unique beauty – small, made of almost raw malfit, it stands at an arbitrary angle to the existing street grid. This is due to the fact that the House of the Merchant Guild of the Holy Spirit was built before the process of restructuring Vyborg. We can say that this is a rare example of ancient Greek boulder architecture, preserved to this day, a kind of souvenir from the “Swedish Vyborg“.

According to legend, the owner of this house was some kind of merchant whose name was already forgotten in years, and only in the 16th century the house was transferred to the trading guild of those times. Today it is an unobtrusive house, the first floor of which has grown into the ground – but once upon a time it did not seem so tiny compared to other buildings. On the ground floor of the house there is one large room with a carved table, in which medieval merchants made various deals. Plus a spacious basement for storing goods. An external staircase led to the second floor, where the premises were located. But gradually the ground level rose, and thus the first floor was below the level of the same sidewalk, turning into a basement – so the house became one-story.

The current appearance with a peaked roof and an updated tiled roof was given to the house during the restoration in 1978.

In general, the architecture of medieval Vyborg stands out for its miniature. Military fortresses and similar structures against the background of such structures should have looked extremely impressive.

In addition, near the House of the Merchant Guild itself, the foundation of the destroyed building and an 18th-century shutter have also been preserved. One ancient guild structure has also been preserved, which was already built from simple boulders, and perhaps it is even older than the house, but this is not accurate. It is located at ul. Vyborg, 10 – today you can’t get there, since this House is located on the territory of the Vyborg Electric Networks power plant, and only the walls that are gently piled from boulders can be seen through a high fence.

By the 20th century, the house from the side of the streets was closed by the buildings that formed around them, which were destroyed during the Soviet-Finnish War (1939-1944); In 1978, the house was restored on the initiative and project of the architect M.A. Dementieva: the building was returned to its former gable and ridge tile roof. In a similar way, the burgher’s estate was later reconstructed.
After the alteration of the House, for some time there was a club of breeders in it; since 2020, after the transfer of the House to the Vyborg United Museum – Reserve, the building has a Tourist Information Center.

Visit the grand locations House Of The Merchant Guild Of Holy Spirit (Vyborg)  and many more that St Petersburg has to offer!
Contact us@ Russian InfoCenter to Book Classic Russia tour 5n/6d and more tour packages from India to Russia
Choose from flights ex Delhi, Mumbai & Calcutta