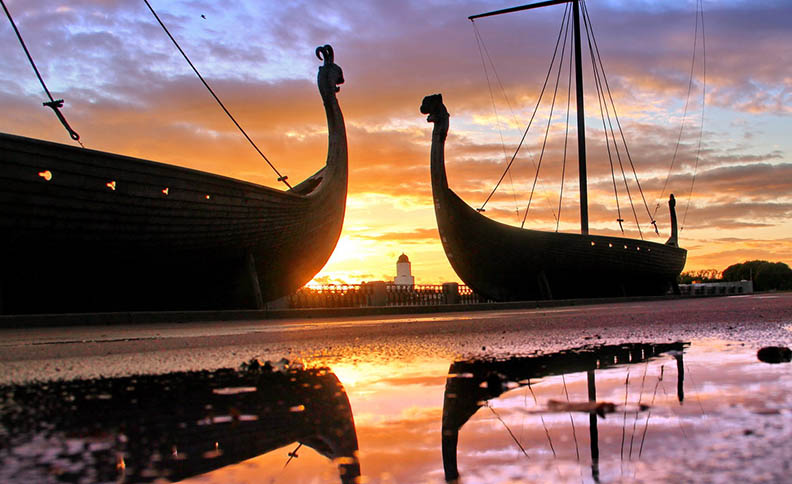 5 facts about Viking Ships in Vyborg, after which you will desire to witness them. Welcome aboard! How did the Viking Ship appear in Vyborg? What do these “ships” and the film “Trees Grow on the Stones” have in common? Why it is worth seeing a monument to a moose?

Viking Ship are located in Vyborg, in the town built on the shores of the Vyborg Bay, north-eastern part of the Gulf of Finland.By the way, Vyborg was founded back in the Middle Ages by the Swedes. One interesting historical fact is that until 1940, Vyborg was the second largest city in Finland.

Besides geographical location its uniqueness is justified by the fact that there are about 300 archaeological, architectural, historical, sculptural and even landscape gardening monuments on the territory of this town.

Ship are rather narrow and prolonged ships of Vikings – medieval Scandinavian sailors who made sea voyages in the VIII-XI centuries from Vinland to Biarmia and North Africa. Ship in Vyborg are built according to the original schemes and drawings, that is why they are of such great interest among tourists of the town.

Ship were built to shoot “Trees Grow on the Stones” the film of 1985, produced back in the USSR, and resulting joint production of the Film Studio named after Gorky and the Norwegian film company Norsk Film A / S with the participation of Sovinfilm. The film is directed by Stanislav Rostotsky and Knut Andersen. The picture watched by almost 20 million people during a year after release got a lot of positive reviews.

Not far from the Ship (only about half a kilometer), you can find another local attraction: a monument to a moose. Famous Finnish animal sculptor Jussi Mäntünen created a sculpture cast in bronze and about 3.5 meters high. Date of the monument was established in Vyborg in 1928.

This monument rightly recognized in Vyborg as one of the best objects of park sculpture. Moreover, the monument is an object of cultural heritage of the peoples of the Russian Federation.

If you get tired of walking around the town and you can take a break in a cute and cozy coffee shop “CUP” located right near the Ship. There you can drink probably the most delicious latte in the town or invigorating tea. In the coffee shop, the average bill is 150 rubles, besides that it is suitable for vegetarians.

Fresh ground swell, warm sun and majestic beauty of the ancient Vikings Ship are definitely worth seeing. Cozy atmosphere of a small town will definitely leave pleasant memories for a long time, so, come along and explore the unknown!